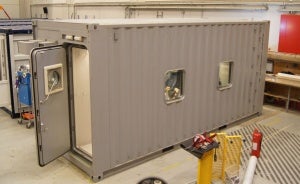 In collaboration with several other companies in North Jutland, DC-Supply in Nørresundby has developed a unique mobile command centre for the Admiral Danish Fleet. The command centre acts as a mobile mine-clearing platform which can be transferred from ship to ship depending on what is required, and DC Supply has great expectations in terms of international sales of the system.

The last Danish mine-clearing vessels were phased out in 2010 in connection with a major round of cost-cutting in the Danish Armed Forces. This mine-clearing fleet was made up of eight Standard Flex patrol and mine-clearing vessels, which were based at ports such as Frederikshavn in the north of Jutland. However, the need for mine-clearing has not diminished, and Danish waters are still full of mines some 67 years after the end of the Second World War. In fact, it is estimated that the Germans and the British laid 40,000 mines in Danish waters during the war, and around 6,000 of these remain undiscovered.

As a result, the Danish Defence Acquisition and Logistics Organisation (DALO), in collaboration with DC-Supply in Nørresundby and a number of other companies in North Jutland, has developed an extremely effective and flexible mine-clearing platform.

DC-Supply specialises in the development and production of container systems and has extensive experience of supplying solutions for both military purposes and to industry in Denmark and abroad. DC-Supply is happy to make this expertise available to the Danish Armed Forces. The system consists of two containers that can be transferred from one vessel to another as and when needed. One container is laid out as a high-tech control centre in which five personnel can work, while the second container is configured for divers and their extensive range of equipment.

The development of this mobile platform has taken place during the last ten months, and the system has recently been tested in a major defence exercise in which several mines were discovered. The final adjustments to the system have now been carried out by DC-Supply, and the control centre delivered to the Admiral Danish Fleet.

Key account manager Søren Trads has been extremely satisfied with the entire process. "The task of developing a new, mobile command centre in two 20ft containers has been extremely exciting and challenging. It’s the first time such a system has been developed as a mobile container platform, but it’s a brilliant idea, and we now have a concept that has the potential to be sold all over the world," he explains.

"The system has indeed been designed to be used all over the world, which has led to, among other things, strict requirements for cooling when operations are carried out in warm waters, and, conversely, efficient heating systems for when operations are performed in waters close to, for example, Greenland. Another major challenge has been to create good, comfortable workstations for five people in a 20ft container. The equipment takes up a lot of space and each workstation has 3 monitoring screens."

Project manager Martin Stechmann from the Danish Defence Acquisition and Logistics Organisation in Ballerup continues: "Our collaboration with DC-Supply has been exemplary, and we are very happy with the product we now have at our disposal.

"The system has been developed as a result of the dedicated mine-clearing vessels being phased out, and we now have a platform which can clear mines in peacetime – for example in Danish waters – and which in acute situations can respond whenever and wherever it might be needed."

The Nordjysk Underleverandørnetværk til Forsvarsindustrien, which is an interest group made up of a network of North Jutland sub-suppliers to the defence industry and has its roots at the Department of Mechanical and Manufacturing Engineering at Aalborg University, aims to provide extra impetus to collaboration with the armed forces and industry. Project manager Bruno Winther speaks with great enthusiasm of the development of the project and its outcome.

"We have gained important and unique experience in North Jutland in terms of the development of solutions for the Danish Armed Forces. We must continue to develop and promote these competences in order to generate further growth and jobs," he says.

"We already have several tangible examples of successful systems for Danish and foreign armed forces, and this underlines the fact that we in North Jutland have the requisite know-how to supply products and services to the world’s biggest industry. It’s not always simply a question of weapons and ammunition; it’s more about security and humanitarian efforts," he points out.

Several other companies in North Jutland have acted as sub-suppliers to DC-Supply in connection with the task, including Jany in Frøstrup near Thisted, which has supplied the advanced seats used in the command centre.

Over the last 20 years, DC-Supply has built camp facilities for Nato military operations in...