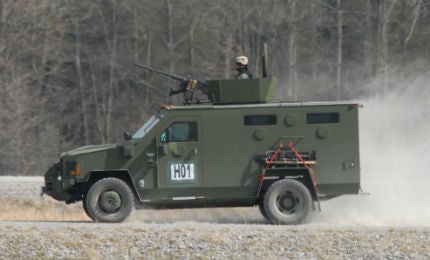 Each Lenco vehicle is custom-built to meet specific end-user requirements while maintaining interoperability between variants and commercially-available parts.

The Lenco BearCat G3 is the most widely used tactical APC in North America.
A Lenco BearCat belonging to the US Park Police in Washington, DC on high alert following Osama Bin Laden’s death.
The BearCat is capable of defeating multiple rounds from high-powered rifles, including 7.62 Nato and .50 CAL BMG rounds.
The Illinois South Suburban Emergency Response Team (SSERT) responds to a critical incident.
The road is closed in this southern California standoff.
The Moroccan Auxiliary Forces operate nearly 100 anti-riot BearCats with hydraulic plows.
The Lenco BombCat is an armored EOD response and rescue vehicle based on the BearCat platform.
The Lenco MedCat is an armored medical evacuation (ambulance-style) vehicle based on the BearCat platform.
The Lenco VIP is an armored diplomatic transport (SUV-style) vehicle based on the BearCat platform.
The Lenco BEAR is a tactical APC with seating for 16 personnel and 175cm of interior height.

The Lenco BearCat is the standard of the industry and the primary APC used by SWAT and SRT, military police and national police and security forces in vital tactical roles. The BearCat provides lifesaving armor in barricaded suspect callouts, high-risk warrants and active shooter scenarios. Its open floor plan seats 10-12 fully equipped operators and allows for response and rescue of downed personnel needing medical intervention. The BearCat can be designed with a variety of features, including two- and four-door variants, on-road / off-road capability and communications, CBRNE and countermeasure technology.

When configured for anti-riot applications, the Lenco BearCat can effectively respond to and contain civil disturbance incidents. Lenco installs steel mesh screens on all windows and lights to protect against hand-thrown objects. Fire suppression systems for the engine bay, tires and vehicle exterior are available to extinguish attacks from hand-thrown incendiary weapons, such as petrol bombs. An optional long-range acoustic device (LRAD) effectively addresses crowds in excess of 1,000m away. The BearCat can also be equipped with a front plow to move cars and debris.

The Lenco BombCat offers the proven ballistic and blast survivability of an armored Lenco BearCat with the design and functionality of a bomb disposal vehicle.

The BearCat EOD is designed to accommodate a tactical robot up to 5ft tall and nearly 500lbs in the vehicle’s rear compartment. Robots enter/exit the vehicle through a rear-mounted or curb side ramp. Robots can then be deployed off a hydraulic lift system located at the front of the vehicle, monitored by a front-mounted camera. The fiber-optic cable is managed through the BombCat’s spool storage reel while technicians track the robot through a computer monitor. A color / thermal camera can elevate 10ft above the roof for enhanced visibility.

The Lenco MedCat was designed to meet the requirements of law enforcement tactical EMS and military tactical combat casualty care (TC3) personnel. This model can also be used as an armored response and rescue SWAT truck for dangerous call-outs, and is equipped to provide tactical EMS with a safe and effective environment to deal with trauma cases.

The Lenco BearCat VIP was designed as a heavy-duty alternative to overweight and underperforming armored SUVs. The BearCat VIP is fully constructed of steel armor plate with DM-51×2 grenade-protected floor material and IED blast seats. This model shares the same platform and combat-tested armor materials as our BearCat tactical vehicles.

When built as the diplomatic transport / personal protection variant, the four-door BearCat VIP seats six with a center aisle for easy entry and egress. The low-profile roof hatch can be used for escape or as a gunner’s position. As a covert tactical operations variant, the BearCat VIP provides an open floor plan and weapons mounts for a fully equipped six to eight member spec ops team running convoy protection.

The BEAR is Lenco’s heavy-duty 4×4 APC that was originally developed in response to the increased threat to national security. The nation’s most prestigious special weapons and tactical teams utilize the BEAR’s impressive protection, durability and mobility to implement life-saving tactics in the field.

The BEAR is also suitable as a tactical support vehicle for military defense. The large rear double doors and open floor plan allow for easy deployment of a 16-man, on-base tactical team. The BEAR can also be designed with features for command-and-control, convoy protection, anti-riot and high-risk missions where IED underbody and high-velocity fragment protection is required.

Lenco Industries, the global leader in the design and manufacture of armored police vehicles, recently completed delivery of BearCat® armored vehicles to the Australian National Counter Terrorism Committee (NCTC), a national body comprised of representatives from the government of the commonwealth, states and territories.

Lenco Industries, the global leader in the design and manufacture of armoured police vehicles, recently completed delivery of 88 BearCat® armoured vehicles to the Moroccan Auxiliary Forces.

The BTR-3DA, which is used by the Ukrainian Armed Forces, is based on the BTR-80 8×8 armoured personnel carrier (APC).