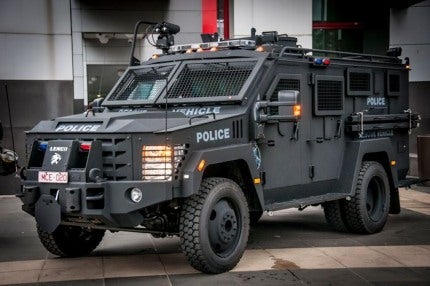 Lenco Industries, the global leader in the design and manufacture of armored police vehicles, recently completed delivery of BearCat® armored vehicles to the Australian National Counter Terrorism Committee (NCTC), a national body comprised of representatives from the government of the commonwealth, states and territories. The BearCat is part of Lenco’s line of light and medium armored response vehicles, used by hundreds of specialised tactical teams in the United States and abroad.

The procurement by NCTC followed the purchase of BearCats by several Australian entities, including New South Wales (NSW), Western Australia, and the Australian Capital Territory (ACT). After the successful deployment of the vehicles and positive feedback on their usefulness, the NCTC decided to purchase and deploy BearCats for each state and territory.

Based on feedback from NCTC, Lenco supplied the BearCats equipped with a new custom feature – rear-facing flip-down seats, which maintain an open rear floor plan. This option has since become one of the most widely selected configurations, chosen because it makes it easier to get people safely inside the vehicle, providing a clear path and safe entry / egress points at three sides of the BearCat.

With military grade armor materials, a spacious interior and a powerful 4×4 system, the BearCat can easily accommodate 10 to 12 operators across rugged terrain. The BearCat can also reach speeds up to 90 miles per hour (145 kilometers per hour) for rapid response in critical incidents. Due to its ease of use, low maintenance costs, and innovative designs, the BearCat is becoming an increasingly popular alternative to up-armored military vehicles around the globe.

The Lenco BearCat APC is built on a commercially available chassis, which allows for warranty-covered repairs with maintenance and parts replacement through OEM dealers and truck centers. This greatly reduces lifecycle maintenance costs and training expenses when compared with specialized military vehicles. The armored trucks for the order were manufactured at Lenco’s primary facility in Pittsfield, MA.

Lenco Industries, the global leader in the design and manufacture of armored police vehicles, will...

Lenco Industries, the global leader in the design and manufacture of armoured police vehicles, recently...