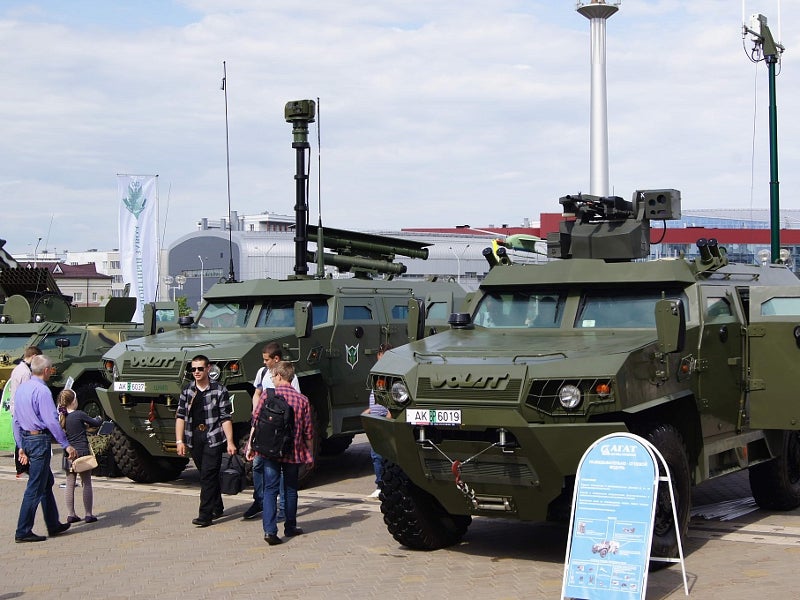 The vehicle can be configured to perform roles such as combat, reconnaissance, command and control, armoured personnel carrier, patrol, ambulance, and logistics. It offers high mobility and superior off-road performance.

The first prototype of the MZKT-490100 armoured vehicle was built in December 2015 and unveiled at the Eurosatory 2016 defence and security international exhibition in Paris, France.

The baseline vehicle passed a series of preliminary tests conducted by the Ministry of Defense of Belarus in April, while the tests on other variants are scheduled to be held at the end of the year.

Design and features of the light armoured vehicle

It has a gross vehicle weight of 11,000kg and a payload capacity of 1,500kg. It can accommodate two crew members and up to eight troops.

The crew cabin is located next to the engine room in the forward portion of the vehicle, while the troop compartment is positioned at the rear. Both the crew and passenger areas are fitted with two separate doors on either side, with bullet-resistant glass windows.

A large door is provided at the rear with two windows to enable fast movement of troops. A firing port is placed below the windows to allow troops to increase firepower.

The vehicle incorporates an information and control system for monitoring onboard components and systems in real time.

A roof-mounted JSC SRPC Shershen-M anti-tank guided missile (ATGM) system can be fitted to the vehicle to engage modern armoured vehicles, military installations and low-altitude targets within a distance of up to 8km.

The weapon’s sighting system has two viewing channels (narrow field-of-view and wide field-of-view), a laser rangefinder, and an independent line of sight stabilisation system. It can be operated by a two-member crew and uses four different missiles with 107mm, 130mm and 152mm ammunitions.

The vehicle can be armed with an Adunok remotely controlled observation and fire complex to defend light armoured targets.

A Groza-S counter-unmanned aerial vehicle (UAV) electronic warfare station can be fitted optionally for detection, tracking and jamming of UAVs.

“The first prototype of the MZKT-490100 armoured vehicle was built in December 2015 and unveiled at the Eurosatory 2016 defence and security international exhibition in Paris, France.”

The tactical vehicle also offers a high level of protection for crew and occupants from landmine blasts and improvised explosive devices.

The bulletproof glass windows and blast attenuating seats further increase the survivability of the occupants.

The MZKT-490100 light armoured vehicle is powered by a 4.4l, in-line four-cylinder, turbocharged YaMZ-53452 diesel engine developed by Yaroslavl Motor Plant. The engine provides an output power of 215hp at 2,600rpm, allowing the vehicle to attain speeds up to 120km/h.

The powerplant features MZKT-2361 hydromechanical automatic transmission system with six forward and one rear gears. An independent coil spring suspension is fitted to the wheels to improve manoeuvrability on difficult road conditions.

The vehicle is provided with 14.00R20 wheels, as well as primary and emergency brakes with an anti-lock braking (ABS) system.