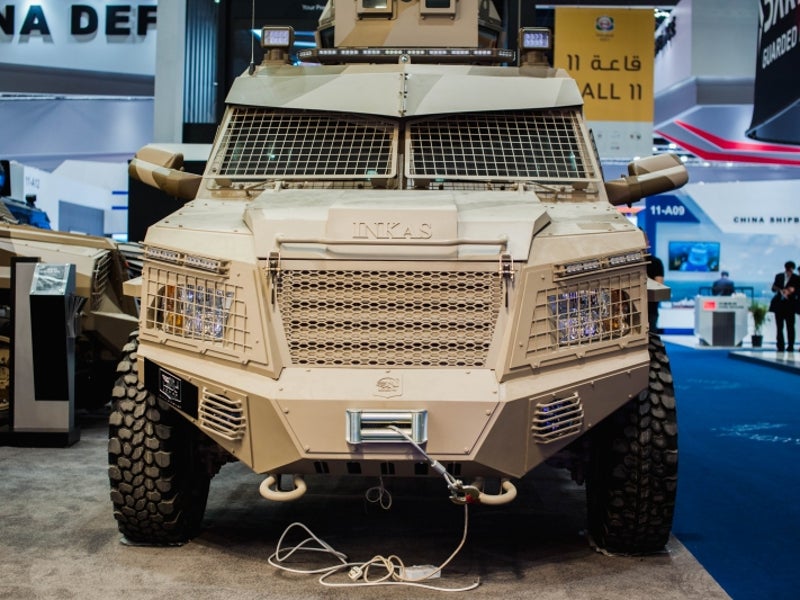 The Titan-D 4×4 armoured personnel carrier (APC) is produced by UAE-based company INKAS Vehicles to meet the requirements of worldwide military and law enforcement forces. It is the latest member in the family of Inkas Titan APCs.

The APC was first unveiled to the general public at the International Defense Exhibition 2017 (IDEX 2017). The vehicle is intended for light combat, VIP convoy, and border patrol and security missions.

The Titan-D APC is based on the chassis of the Dodge Ram 5500 pickup truck. The conventional layout of the APC houses an engine at the front, crew cab in the centre and troops compartment at the rear. The driver and commander are seated in the crew cab, while ten troops are housed at the rear on individual seats protected from mine blasts. The vehicle can accommodate up to 12 personnel.

The crew can enter and exit the vehicle through a door on either side of the hull. Troop entrance / egress is provided by a small door on each side of the hull at the forward troops compartment. The vehicle features air conditioning and heavy-duty ventilation systems to improve crew comfort.

The vehicle can be optionally equipped with a range of equipment and systems, including external video cameras, global positioning system (GPS) antenna, day and night long-distance observation camera, ballistic radiator protection, a winch and a battle management system according to customer requirements.

The vehicle can be installed with a one-man open-top turret mounting a 7.62mm or 12.7mm machine gun. It offers all-round protection against small arms fire and IED fragments and allows the gunner to aim and fire the weapons from a protected enclosure shielding from enemy fire.

The Titan-D APC can be also be mounted with a remotely controlled weapon station (RCWS) armed with a range of weapons, including small to medium-calibre guns and a 40mm grenade launcher.

Self-protection features of the APC

The Titan-D APC protects its occupants from small arms fire and armour piercing incendiary rounds. The armour fitted to the vehicle offers STANAG 4569 Level 2 ballistic protection. The V-shaped hull of the Titan-D is made of certified STANAG Level II materials, while the doors are fitted with 360° bullet catchers.

“The APC was first unveiled to the general public at the International Defense Exhibition 2017 (IDEX 2017).”

The vehicle also offers protection for battery and electronic control module and is also fitted with a fire suppression system.

The APC is powered by a Cummins 6.7L diesel engine coupled to a six-speed automatic transmission. The engine develops a maximum power output of 330hp at 2,600rpm.

The Titan-D can run at a maximum speed of 110km/h on road and attain a maximum cruising range of 1,000km.