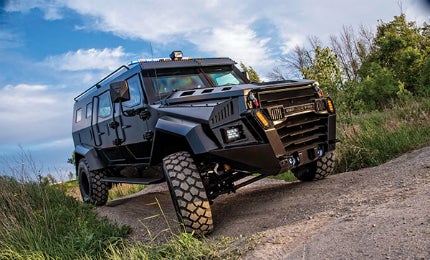 The tactical attack and defence vehicle can be used by military forces, SWAT, law enforcement agencies and peacekeeping organisations. It can perform missions in extreme climatic conditions.

INKAS shifted the production of the armoured vehicles from the UAE to Canada in 2014 to centralise the operations and boost the quality of products for both military and civil markets.

The Sentry APC is a 4×4 drivetrain vehicle with a wheelbase of 3.576m. Its design and production began in 2014 at INKAS manufacturing facility located in Toronto, Canada.

The vehicle is based on a heavy-duty truck chassis, which was developed using the best engineering solutions applied in the previous models of INKAS. It features advanced custom-designed components that provide increased weight capacity and reliability.

Eight people can be accommodated by the armoured personnel carrier, including passengers and crew. Seating inside the cabin is arranged to ensure occupants can efficiently operate while maintaining tactical positions.

Occupants can enter and exit the vehicle through two doors located on each side, and a rear door. The passenger compartment, engine bay and important mechanical components are protected by perimeter armouring.

"INKAS shifted the production of the armoured vehicles from the UAE to Canada in 2014 to centralise the operations and boost the quality of products."

The vehicle can be customised according to the mission requirements. It can be converted into a mobile command centre or a medical evacuation vehicle.

An extra layer of insulation come with the cabin. It also comes smart ventilation system that provides comfort to passengers in severe climatic conditions including extremely low temperatures as well as hot and humid weather.

The vehicle can also be equipped with additional security features, including an escape hatch, siren or public address system, emergency lights package, and electronic military system. It can be fitted with external view cameras providing 360o field of view. It has a length of 5.9m, width of 2.5m and height of 2.4m.

The APC is also equipped with multi-layer bullet resistant glass. The proprietary overlap system developed by INKAS prevents the penetration of bullets between the seams of the doors.

The Sentry APC is powered by a 6.7-litre V8 turbocharged diesel engine, which generates 362hp at 4,750rpm. A six-speed automatic transmission system is coupled with the engine.