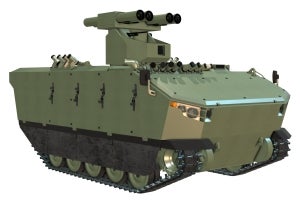 Contract negotiations held with FNSS Savunma Sistemleri A.Ş. in relation to the anti-tank vehicle project were initiated by the Defence Industry Executive Committee’s decision taken on 9 March 2016 and have recently been concluded.

The project contract was officially signed on 27 June 2016 at a ceremony held in the Undersecretariat for Defence Industries.

The project will involve the integration of anti-tank missiles within the Turkish Land Forces inventory on armoured vehicles equipped with anti-tank turrets developed specifically for the project. A total of 260 anti-tank vehicles will be procured within the scope of the project, including both tracked and wheeled vehicles.

FNSS plans to use the lightest member of the KAPLAN vehicle family as the platform for the tracked type vehicle of the anti-tank vehicles project, while considering the PARS 4×4 as the basis for the project’s wheeled type anti-tank vehicle.

In addition to having ballistic and mine protection, the amphibious tracked and wheeled anti-tank vehicles will be capable of conducting joint operations with armoured units, and have a modular mechanical and electronic infrastructure that enables rapid adaptation of future potential requirements.

Within the scope of this project, design, development and prototype qualification processes will be completed in 2018, and in the following two-year period, serial production of 260 each anti-tank vehicles will be completed and delivered to Turkish Land Forces.