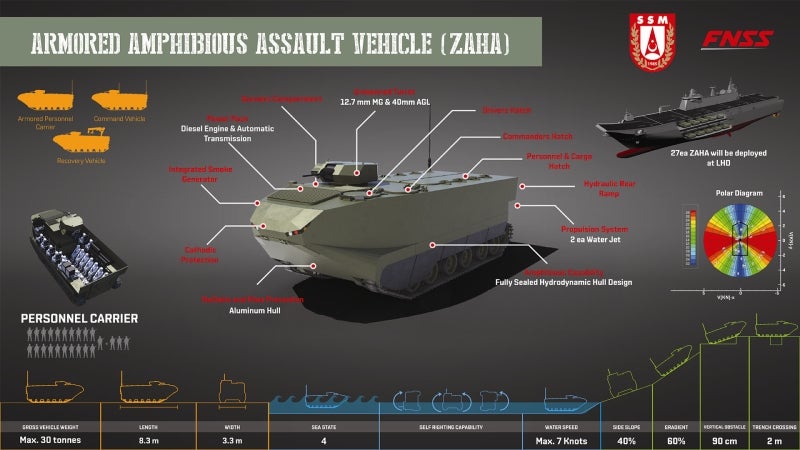 The contract for the Armoured Amphibious Assault Vehicle (ZAHA) Project was signed between SSM and FNSS on 7 March in Ankara. The programme was initiated by the Undersecretariat for Defence Industries (SSM) to meet the amphibious armoured vehicle requirement of the Turkish Naval Forces Command.

In addition to enabling the safe landing of units during landing operations, armoured amphibious assault vehicles also serve as armoured combat vehicles or armoured personnel carriers after reaching shore. During the landing phase of an operation, these vehicles are launched from landing helicopter dock (LHD) approaching the coast, and rapidly cover the several kilometres distance in between, allowing units to land with minimum delay.

Once on land, they can continue taking part in operations side by side with other armoured vehicles. As vehicles that have a dual nature due to their mission requirements, armoured amphibious assault vehicles need to exhibit superior performance both at sea and on land. Only a few countries around the world have such vehicles in their inventories. Among NATO countries and allies, only a single company other than FNSS produces vehicles of this class.

Under the contract signed between SSM and FNSS, the vehicles will be developed and produced by FNSS based on an indigenous development model. The FNSS will deliver a total of 27 vehicles, including 23 personnel carriers, two command and control vehicles and two recovery vehicles.

The technical characteristics of the Armoured Amphibious Assault Vehicles were determined by taking into consideration the operational concept and mission requirements defined by the Turkish Naval Forces Command. Compared to similar examples, these vehicles are expected to be superior in the following respects:

"Thus, in addition to successfully maintaining our status as the largest and most important local supplier to the Turkish Land Forces Command in terms of the variety of vehicles and the duration of service, we now deservedly take pride in having become a vehicle supplier for the Turkish Naval Forces Command as well.

"The FNSS vehicles currently in the inventory of the Turkish Armed Forces, which include the Armoured Combat Vehicles (ACVs), the SAMUR Armoured Amphibious Assault Bridge and the KUNDUZ Amphibious Armoured Combat Earthmover, are performing their duties admirably.

"Vehicles that will enter the inventory in the coming period include the ACV-30, which will be used in the KORKUT project; the KAPLAN-15 and PARS 4×4, which will be used in Anti-Tank Vehicles project; and the Armoured Amphibious Assault Vehicle. With the vehicles tailored for each requirement, FNSS will continue to serve the Turkish Armed Forces."