International Armored Group (IAG) is a manufacturer of armoured cars, armoured trucks and other armoured vehicles with operations in the US, Canada and Middle East. 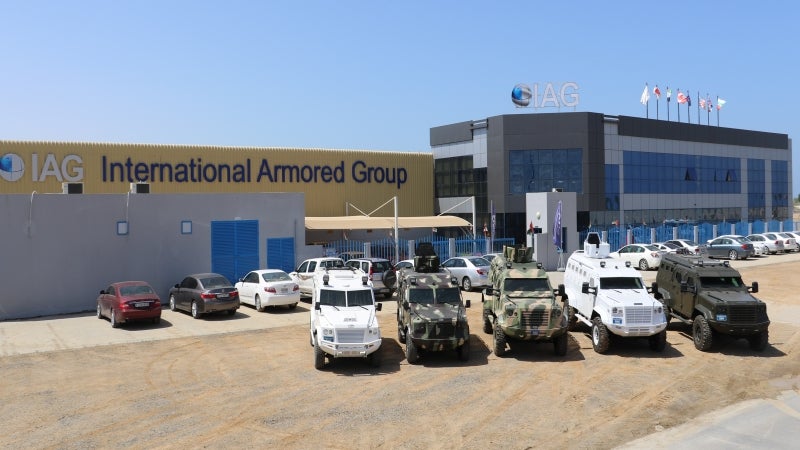 International Armored Group (IAG) is a leading manufacturer of armoured cars, trucks, and other military vehicles.

IAG was one of the first armoured car companies in the world to have an independently tested and fully certified armoured vehicle under the new VPAM BRV 2009 guidelines with VR7 ballistics protection. The VR7 Toyota Landcruiser 200 Convoy accurately represents IAG’s manufacturing and engineering capabilities as among the best in the industry.

The company has supplied armoured vehicles to organisations such as the United Nations, US government and military, law enforcement agencies, embassies, banks and private security firms, as well as various individual clients.

IAG has operations in the US, Canada and Middle East and has sold thousands of vehicles to clients across the world over the years.

IED attacks present one of the greatest threats to armoured vehicles, and it can be difficult to evaluate whether a vehicle’s armour is effective in protecting against these unless it has undergone live blast testing.

IAG’s VPAM BRV 2009 VR7 certified Toyota Landcruiser 200 Convoy has been successfully tested against both ballistic and blast attacks by Beschussamt Mellrichstadt in Germany.

The vehicle and simulated occupants survived the simultaneous detonation of DM51 German hand grenades, HG85 Swiss fragmentation grenades, DM31 anti-personnel mine and a 12.5kg PETN (17kg TNT equivalent) side blast attack without any deformation. IAG’s range of armoured vehicles all feature a design derived from this vehicle.

In addition to low-profile light armoured vehicles, IAG offers a wide range of armoured personnel carriers (APCs) based on various truck chassis. The APCs all integrate a V-hull design and are designed to fill the gap between the much more expensive and heavy MRAPs and the low profile, light armoured commercial vehicles.

These include the Titan and Praetorian APC (Ford F-550 chassis), Predator APC (Ford F-350 chassis) and Jaws APC (Toyota Land Cruiser 200 chassis), all of which can be armoured up to NIJ IV / CEN B7 level.

IAG’s engineering expertise and flexible manufacturing capabilities means the company is capable of producing up to 100 armoured vehicles per month over a wide variety of chassis. These include the commonly-found Toyota Landcruiser 200, Toyota Land Cruiser 76 or Land Cruiser 78, and Chevrolet Suburban, as well as luxury vehicles such as the Mercedes Benz S550, and pickup trucks such as the Ford F-350.

Whether it is VIP close protection, armoured convoy or armed patrol, IAG is able to manufacture a wide range of vehicles to meet any client requirement.

CIT vehicles are based on a wide variety of trucks, depending on the conditions the vehicle will be used in. Users looking to carry a higher payload, such as the transport of gold or other heavy metals, would benefit from our custom built armoured Ford F550 trucks or international trucks.

Clients looking for smaller armoured vehicles should consider IAG’s pickup trucks and light trucks, such as the Toyota Hilux, Ford Ranger, and Ford E350 cargo vans. Special purpose armoured vehicles for a variety of missions IAG also manufacturers and produces a wide range of armoured buses and ambulances to meet many different needs.

International Armored Group is a quality-conscious armoured vehicle manufacturer with more than 20 years of experience specialising in the design, engineering, prototyping and manufacturing of armoured commercial and tactical vehicles, components, and ballistic glass and framing systems.

The company has grown substantially over the years to become one of the most technologically advanced armoured vehicle manufacturers in the world, and now has locations in the US, UK, Canada, United Arab Emirates, Turkey, Bulgaria, Iraq and Pakistan.

IAG’s engineering department has more than 60 years of industry, and the company’s state-of-the-art production facilities allows its highly skilled engineers and technicians to convert any vehicle platform into a fully re-engineered protective vehicle. These include VIP protection, luxury and operational SUVs and cars, police and law enforcement vehicles, and tactical and armoured personnel carriers.

IAG’s core competency is the ability to engineer and design solutions that provide optimal survivability and reliability, while maintaining superior driving dynamics and performance.

As a global company, IAG’s is able to supply North American, European, Gulf Country (GCC) and right-hand drive type vehicles. IAG has access to an extensive range of chassis that can operate in adverse temperature environments and low-quality fuel. The company’s production plants are strategically located near major sea and airports, meaning vehicles can be shipped worldwide with ease.