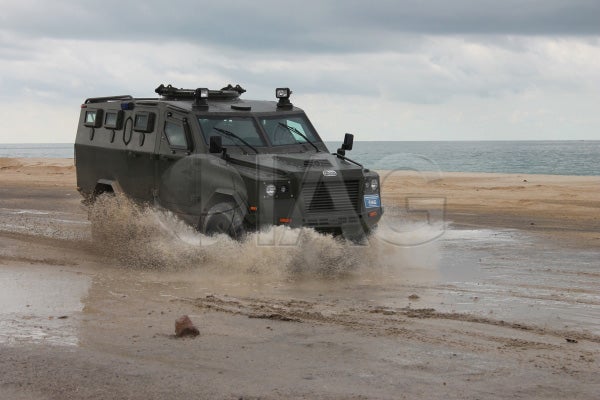 The APC is primarily deployed in non-combat missions such as border patrol and surveillance, and is offered to government, military and law enforcement agencies.

The Jaws armoured personnel carrier is based on the chassis of Toyota Land Cruiser 200 series commercial vehicle. The vehicle features conventional layout with engine at front, crew section in the middle and troop compartment at rear. The lightweight APC is designed to offer high mobility while offering superior protection for the occupants.

The APC can accommodate two crew and up to eight fully equipped troops on blast-resistant seats with four-point seat harness. The seating layout can be customised according to the mission requirements. The vehicle incorporates commercial SUV-type dashboard and controls. The HVAC system aboard the vehicle ensures optimal crew comfort.

The APC is offered in both left and right hand drive configurations as well as with different engine and transmission options. It has two spare tyre assemblies, auxiliary fans and a heavy duty 300AMP alternator. The lights are fitted with wire mesh protection.

The vehicle is provided with a roof mounted turret for observation. The bigger ballistic glass panels on the body allow observation of surroundings, while firing port at each seat allows the troops to aim and fire their individual weapons. Entry/exit for the occupants is provided through doors on both sides as well as a rear door.

Self-protection features of the Jaws APC

The Jaws APC is integrated with Opaque armour made of pre-certified ballistic grade steel. The vehicle can be fitted with armour packages ranging from NIJ III-a /CEN B4 up to NIJ IV/CEN B7 for protection against 5.56mm and 7.62mm NATO armour piercing rounds. Add-on armoured kits are also fitted based on the customer needs, to enhance the self-protection of the vehicle.

"The forward, sides, rear, roof and bottom are designed to withstand the incoming ballistic objects from all angles."

The forward, sides, rear, roof and bottom are designed to withstand the incoming ballistic objects from all angles. The crew and passengers are well protected from explosive threats. The vehicle is also fitted with blast attenuation seating system to protect the occupants from the impact of detonations. The system reduces the blast wave and downward forces inflicted on the occupants in the event of explosion.

The eight-cylinder diesel engine develops a maximum power of 232hp and torque of 453lb-ft (614Nm). The vehicle is fitted with 12V electrical system, which can be upgraded to 24V.