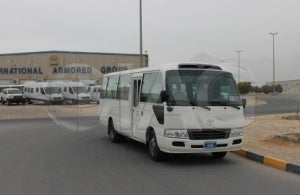 The armoured Toyota Coaster is one of the few vehicles that can function as a discreet armoured passenger bus in the Middle East. With its large passenger capacity and a capable diesel engine designed to operate in harsh environments, it is the ideal platform for secure personnel transport. However, as with any vehicle, the Coaster is prone to reliability issues without properly upgraded components.

The Toyota Coaster is available in both diesel and gasoline engine variants. Armouring is available up to the B6 level, while retaining the original exterior appearance of the soft-skin vehicle. In B6 configuration, the armoured Toyota Coaster has a seating capacity of up to 15 passengers, plus driver.