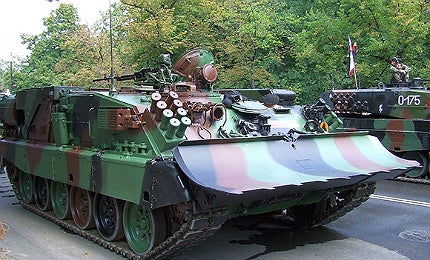 The WZT-3M is an armoured recovery vehicle (ARV) produced by the Poland-based Bumar and Bharat Earth Movers Limited (BEML) of India. It is an upgraded variant of the WZT-3 ARV. The vehicles are operated by the Polish and Indian armies. The WZT-3M of the Indian Army is also referred to as ARV-3.

The WZT-3M is primarily intended to recover damaged main battle tanks (MBTs), tracked armoured vehicles and heavy vehicles from the battlefield. The vehicles are also equipped with special equipment for conducting repairs in the field, clearing obstacles and performing earth-moving works.

Orders and deliveries of the armoured recovery vehicle

The Ministry of Defence of India issued tenders for 87 armoured recovery vehicles in December 1997. Bumar and Unimpex were selected as preferred bidders to deliver 44 WZT-3M and 42 Slovak VT-72C vehicles respectively. Bumar and BEML signed a $32m cooperation contract in April 1999 to produce and deliver 44 WZT-3M vehicles to the Indian Army. The vehicles were assembled at BEML’s facility and handed over to the army in 2001.

In April 2002, BEML / Bumar received an $80m direct contract from the Ministry of Defence of India to supply 80 WZT-3M vehicles. Deliveries began in 2003 and were concluded in summer 2004. Polish Army acquired nine WZT-3M vehicles by 2003. The WZT-3 fleet of the army was later upgraded to WZT-3M standard.

In February 2004, India’s Defence Ministry signed a contract with BEML for the delivery of 228 WZT-3M vehicles. BEML and Bumar signed an agreement to fulfil the requirement in March 2004. Deliveries began in the same year and were concluded by spring 2007.

In October 2011, the Ministry of Defence of India placed a $275m contract with BEML for 204 ARV-3/WZT-3M vehicles. In January 2012, Bumar and BEML signed a cooperation agreement to deliver these vehicles.

The WZT-3M is based on the hull of the PT-91 Twardy MBT. It accommodates a four-man crew including a driver, commander, mechanic-operator and gunner. The vehicle integrates standard equipment, such as a hydraulic crane, front-mounted dozer blade, towing device, welding and cutting devices and main and secondary winches. The vehicle is also provided with observation devices for the driver and commander, communication systems and a set of special equipment and tools. The WZT-3M has a length of 8.5m, width of 3.3m and a height of 2.7m. The combat weight of the vehicle is 42t.

The WZT-3M is armed with a 12.7mm anti-aircraft gun to protect the vehicle from airborne threats. It also features 12 smoke grenade launchers.

"The WZT-3M is armed with a 12.7mm anti-aircraft gun to protect the vehicle from airborne threats."

The composite and laminated armour of the vehicle protects the crew from high-explosive anti-tank (HEAT) projectiles and missiles. The vehicle is also equipped with NBC protection and a fire suppression system.

The WZT-3M is powered by a PZL-Wola S12U four-cylinder diesel engine equipped with new fuel and air injection system. The engine develops a maximum power output of 850hp. The power-to-weight ratio of the vehicle is 20.2hp/t. The propulsion provides a maximum on-road speed of 60km/h.

The WZT-3M is fitted with torsion bar suspension. The running gear includes six road wheels and three track return rollers per side, with an idler in front and drive sprocket at the rear.

The vehicle can negotiate an elevation of 30° and a side slope of 25°. It can cross trenches of 2.8m in width and vertical obstacles of 0.7m in height. The fording depth of the vehicle is 1.2m. The WZT-3M can be operated in all weather conditions, including temperatures ranging from -25°C to +50°C.

Pinaka is a multibarrel rocket launch (MBRL) system used by the Indian Army. It was developed by the Defence Research and Development Organisation (DRDO).