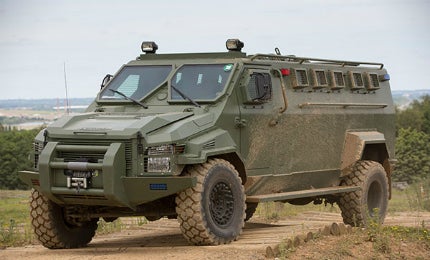 The vehicle features a larger compartment, which can be configured for use as command unit, battle field ambulance, or as an APC. It can be deployed in a variety of military missions and peace-keeping operations.

The APC fitted with Shershen-D anti-tank missile system was displayed at the Defence Vehicle Dynamics (DVD) 11th exhibition in the UK in June, 2014.

The Boraq (or Boragh) armoured personnel carrier (APC) is produced by Vehicle and Equipment Industries Group (VEIG), a subsidiary of the Iranian Defence Industries Organisation (DIO).

The Warrior armoured personnel carrier is based on the Ford F-550 chassis. The armoured hull of the vehicle is constructed using the latest generation armoured materials.

It offers CEN Level BR6 protection against ballistic and blast threats. It also comes with add-on armour, anti-riot mesh on windows, and blast mitigation floor mat. Meanwhile, the engine compartment is provided with ballistic protection to protect from forward attacks.

The Warrior APC can accommodate 12 passengers, one driver and a commander in standard configuration. Its large doors facilitate easy and quick boarding of equipment and personnel. It also comes with a heavy-duty bull bar, recovery winch, and exterior hand rails.

The vehicle is fitted with electrical equipment, such as strobe lights, a siren and public address system, as well as an intercom, radio, and a GPS system with antenna. It also comes with additional lights, fire suppression system, air conditioning system, observation telescopic mast, rear view camera, and a 10t capacity electrical winch.

Armament fitted to the Warrior APC

The vehicle is optionally fitted with a universal turret ring capable of traversing 360°. The roof turret can be mounted with a standard 0.50 calibre machine gun, a smoke launcher system, rifle racks, remote weapon station, and turret gunner stand. Seven gun ports are also built directly into the vehicle’s doors and windows.

The Warrior APC displayed at the DVD 2014 exhibition was fitted with an anti-tank missile launcher station integrating two launchers for the Belarus-made Shershen-D anti-tank guided missile.

The vehicle is powered by a FORD V8 6.7l turbocharged diesel engine, which develops 300hp at 2,800rpm. The Euro 3-compliant engine is coupled with electronically-controlled, six-speed, automatic gearbox.

Also featured on the vehicle is a 12V electric system that has a fuel tank with a capacity of 257l.

The APC features 4,200mm wheel base that can be fitted with STIS tire inflation system to improve mobility in difficult terrains. It comes with cross-county or off-road tires fitted with military-standard wheel rims and run-flats. The front and rear suspensions are formed of coil-springs and shock absorbers. It also features hydraulic power steering system.

The ground clearance and curb-to-curb turning circle diameter of the vehicle are 510mm and 10m, respectively. Meanwhile, the approach and departure angles are 38° and 65°, respectively. The vehicle is capable of operating in temperatures ranging between -20°C and 55°C.