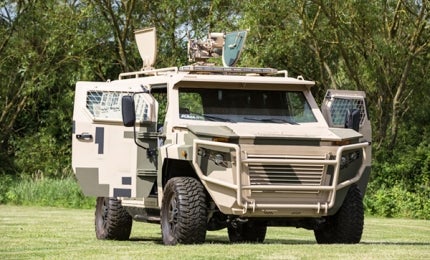 The Puma 4×4 wheeled armoured personnel carrier (APC) by STREIT Group is suitable for use in military, law enforcement, fire support and counter-terrorism operations.

"The APC was unveiled for the first time at the International Defence Exhibition and Conference (IDEX) 2013."

The vehicle can carry six personnel and two crew members. It features a drop seat layout and can be optionally fitted with bench seating to create additional stowage. It is designed to suit high-speed mobility operations by quick reaction forces and convoy escort duties. It also features lockable fuel doors, heavy-duty door hinges, reinforced door pillars and posts, as well as internal locking system on all doors.

The Puma APC is fitted with a universal turret ring and a roof turret, suitable to accommodate a standard 50Cal machine gun (MG). The turret can also be mounted with a 12.7mm machine gun or 40mm automatic grenade launcher (AGL).

The STREIT Group Cobra 4×4 APC is intended for law enforcement and paramilitary branches for transporting troops in hostile environments.

The vehicle also features a wall gun-port, gun rack and remote weapon station. It can also be fitted with client-specific weapon systems.

The Puma APC can be utilised in rough terrain and obstacle crossing operations. The vehicle is fitted with independent coil-spring high-mounted double-wishbone suspension system. It features power-assisted ventilated 13.9in front and 13.6in rear disc brakes, and also comes with Star Safety System™.

The vehicle features hydraulic power rack-and-pinion steering system. It is fitted with Michelin XZL 395/85R20 wheels and tires. The ground clearance and curb-to-curb turning circle diameter of the vehicle are 345mm and 11.3m respectively.

The Iveco Massif is a heavy-duty four-wheel-drive vehicle manufactured by Italian firm Iveco, a subsidiary of motor company Fiat. It…

Shadow Rider unmanned ground vehicle (UGV) has been designed to serve as a force multiplier on the battlefield. It is…