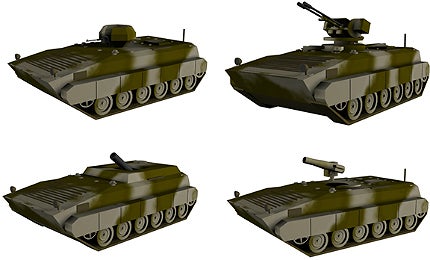 The Boraq (or Boragh) armoured personnel carrier (APC) is produced by Vehicle and Equipment Industries Group (VEIG), a subsidiary of the Iranian Defence Industries Organisation (DIO). It is an indigenously built version of the Chinese-made WZ-501/503 series, which itself is a copy of the Russian BMP-1 APC.

The development of the Boraq APC started in 1986 and its first prototype was produced in 1987. The second and third prototypes were completed in 1991. The serial production of Boraq vehicles began in 1997.

The Boraq APC is in service with the Islamic Republic of Iran Army (IRIA), Kazakhstan Ground Forces and Sudanese Armed Forces (SAF).

"The Boraq armoured vehicles are produced in a range of versions for use in amphibious operations."

The Boraq APC incorporates a low profile armoured hull design. It offers complete crew safety and adequate space for the comfort of the troops. The vehicle accommodates a driver compartment and engine in front in side-by-side configuration, and troop section at the rear. The Boraq APC accommodates 12 personnel.

The driver is seated at the forward left, while power pack is placed in front right position. The infantrymen at the rear enter and leave the vehicle through two rear doors which open outwards. The left rear door is fitted with a firing port and a vision device.

The Boraq APC has a length of 6.65m, width of 3.05m and a height of 2.45m. The vehicle weighs 13t when fitted with complete fighting equipment.

The driver sitting at the front left is provided with a single-piece hatch cover and four day periscopes, for observing forward and sides of the vehicle. The centre periscopes can be replaced with a passive periscope for driving during the night.

The Boraq APC is armed with a pintle-mounted Dushka/DShK 12.7mm machine gun. The gun is mounted on a rotatable platform traversing through a full 360°. The Boraq missile carrier is armed with Toophan series of wire-guided Anti-Tank Guided Weapon (ATGW).

"The Boraq APC is armed with a pintle-mounted Dushka/DShK 12.7mm machine gun."

The all-welded steel armoured hull of the Boraq APC offers protection against 7.62mm and 12.7mm rounds, as well as shell splinters.

The vehicle is equipped to interject diesel fuel into the exhaust system for laying a smoke screen. The Boraq APC is also fitted with an NBC protection system and a fire detection system.

The Boraq APC is powered by a V-8 air-cooled diesel engine. The engine develops a maximum power of 330hp. The power-to-weight ratio of the engine is 25.38hp/t. The flexible design layout of the engine allows for quick assembly and disassembly in fewer than 60 minutes.

The fully tracked Boraq APC offers superior cross country mobility in various combat operations. The vehicle is equipped with torsion bar suspension. The running gear includes the drive sprocket in front and idler at the rear. It also has track-return rollers and six dual rubber-tyred road wheels on each side.

The tracks are equipped with rubbers to prevent damages on the paved roads. The drive sprockets are fitted with sprocket rubbers to reduce the noise generated by the tracks.

The Boraq APC has a maximum road speed of 65km/h. The fully amphibious vehicle is propelled in the water by its tracks assisted by a trim vane and bilge pumps. The maximum operating range of the vehicle is 500km. The APC vehicle can negotiate a gradient of 350 and side slope of 250. It can cross a trench of 2.3m.

The BTR-4 is an armoured personnel carrier (APC) with an 8×8 axle configuration.