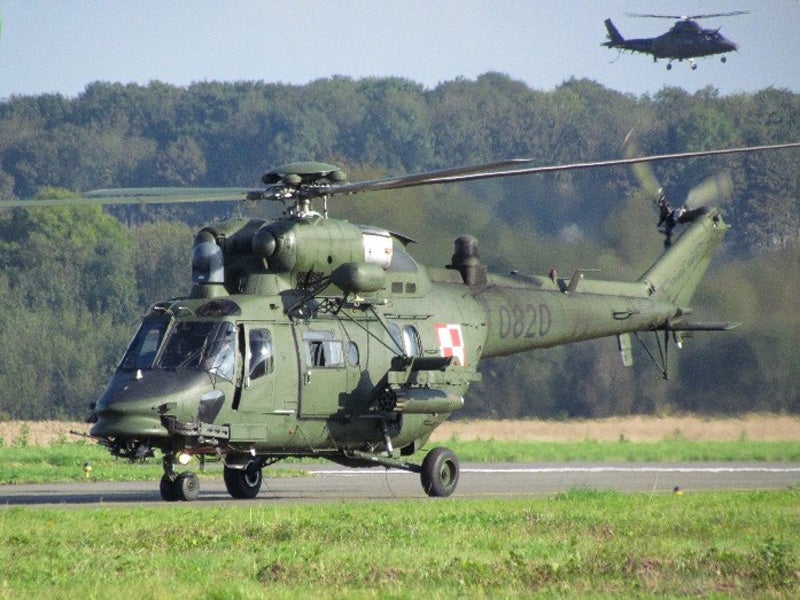 W-3PL Głuszec, a multi-role, combat variant of W-3 Sokół, is in service with the Polish Land Forces. It is designed and manufactured by PZL-Swidnik, a subsidiary of AgustaWestland, in co-operation with the Polish Armed Forces and the Air Force Institute of Technology.

It is intended for multiple missions including combat support, combat search-and-rescue (CSAR) and troop transport. It has the ability to engage both stationary and moving targets.

The W-3PL Głuszec helicopter was demonstrated during the AIR FAIR 2016 International Exhibition held in Bydgoszcz, Poland, in May 2016.

In 2003, PZL-Swidnik signed a contract with the Polish Ministry of Defence to develop a prototype of W-3PL Gluszec for the modernisation of Polish Army’s existing W-3 helicopters.

A contract was signed in 2006 for the delivery of four modernised W-3 helicopters of W-3PL standard. The Polish Land Forces took delivery of the initial four helicopters in December 2010. Poland has ordered an additional four W-3PL helicopters.

Its basic empty weight is 3,850kg and the maximum internal and external load capacities are 6,400kg each. It can carry a maximum useful load of 2,550kg.

The NVG-compatible, armoured cockpit of the W-3PL Głuszec combat helicopter is designed for single-pilot or two-pilot operations. A four-axis autopilot simplifies the operation and reduces the crew workload.

The cockpit is equipped with multi-function displays and head-up displays to present flight data to the operators.

The cabin is fitted with two large sliding doors for cargo loading and unloading. For search-and-rescue missions, the cabin can house up to four stretchers, medical equipment, a 272kg rescue hoist, 2,100kg cargo hook, and searchlight.

A remote-controlled gun turret, armed with a 12.7mm HMGWKM-Bm machine gun, is mounted under the nose of the helicopter to provide self defence for the personnel.

"The W-3PL Głuszec helicopter was demonstrated during the AIR FAIR 2016 International Exhibition held in Bydgoszcz, Poland, in May 2016."

The armament of the W-3PL Głuszec combat helicopters also includes rocket launchers, a mine laying system and 23mm cannon in dispenser.

The onboard self-protection systems such as radar warning receiver (RWR), flare dispensers, identification, friend or foe (IFF), and infrared (IR) warning receiver to improve the helicopter’s ability to detect and engage threats in complex radar environments.

A neutral gas is used in the fuel tanks to help reduce the risk of explosion. The helicopter is also fitted with a wire strike protection system.

Powered by two PZL-10W turboshaft engines, the combat helicopter can achieve a maximum cruise speed of 235km/h and a never-exceed speed of 260km/h. Each engine generates a maximum continuous power of 574kW and a take-off power of 662kW. The engine performance is controlled using a full-authority digital engine control (FADEC) system.

The W-3PL Głuszec can operate up to a distance of 734km using 1,720l of standard fuel and the range can be increased to 1,180km with an auxiliary fuel capacity of 730l. It can stay airborne for up to 252 minutes.