Expand
TITUS is a modular and versatile wheeled armoured vehicle based on combat missions kits, operational environment kits and several other variants.
TITUS can be configured with facilities to support any kind of missions likely to occur in a hybrid conflict.
TITUS 6x6 armoured wheeled vehicle is mounted on a Tatra 6x6 chassis. 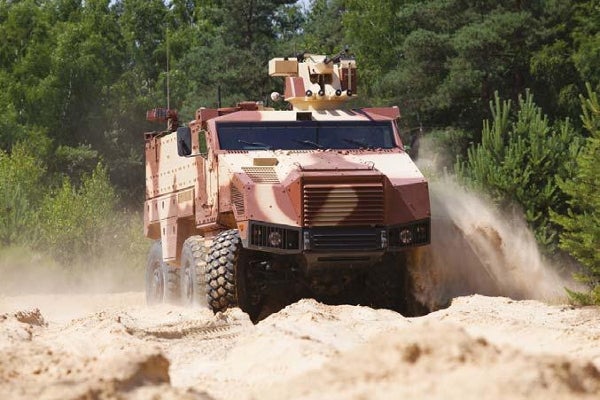 Tactical Infantry Transport and Utility System or TITUS is a new modular armoured wheeled vehicle unveiled by Nexter Systems at the Defence Security and Equipment International exhibition (DSEI) in September 2013.

The modular vehicle will be capable of carrying out missions such as transport of infantry troops, combat, combat support and combat service support functions including medical evacuation, cargo transport, peacekeeping and counter-insurgency.

The combat weight of the TITUS is 23t, which can be optionally increased to 27t by substituting the baggage space of 4t. The internal volume of the vehicle is more than 14m3 including 4m3 of storage space.

The versatile armoured vehicle is capable of carrying three crew, including a commander, gunner and driver, as well as ten troops.

“The versatile armoured vehicle is capable of carrying three crew, including a commander, gunner and driver, as well as ten troops.”

The troops can leave the vehicle using a power-operated ramp, with a minimal ground step of about 280mm located at the rear of the hull, which facilitates both egress and ingress. The driver and gunner can leave through side doors provided towards the front.

The vehicle is designed with two rear roof hatches. A tank is fitted inside the vehicle to provide potable water.

Armament and self protection of the TITUS armoured wheeled vehicle

TITUS is covered with a last generation modular armoured skin and incorporates Nexter’s patented SAFEPRO design providing a level two to level four ballistic protection, mines level 4a and 4b protection, and protection against heavy (improvised explosive device) IED blasts of up to 150kg.

The vehicle can be equipped with any kind of remote control weapon station (RCWS) from 7.62mm to 20mm, and grenade launchers of 40mm, depending on the level of threats and type of missions.

The armaments are paired with thermal sensors and laser range finders. Two light machine guns can be optionally fitted on the rear top. The vehicle is also fully integrated within the C4I network through last generation vetronics.

The vehicle can be equipped with Nexter’s patented PG Guard rocket propelled grenade (RPG) protection system, which is capable of withstanding two to four firings per square metre.

Nexter’s FINDERS (fast information, navigation, decision and reporting system) battlefield management system (BMS) will also be fitted into the vehicle. The FINDER will be compounded by a perimetric camera system and reconnaissance robot Nerva LG.

The TITUS can be configured to suit a variety of military missions based on the mission intensity. It can be customised to accommodate 7.62mm RCWS, protection level two, forward crowd fence, dozer blade and non-lethal weapons for less intensive environments.

“The TITUS can be configured to suit a variety of military missions.”

It can be customised to accommodate 12.7mm or 20mm RCWS, 40mm grenade launchers, protection level three, jammers and shoot detectors for conventional warfare.

The vehicle can also be customised to accommodate additional light machine guns on the back, protection level four, bar armour to protect against rocket propelled grenades (RPG), add-on armour on windows and cable cutters for counter insurgency and military operation in urban terrain.

Nexter’s TITUS is powered by a 440hp Cummins engine, or alternatively can be optionally fitted with a 550hp engine.

The Cummins diesel engine offers the vehicle a maximum road speed of 110km per hour and a maximum road range of 700km. It has front and rear wheeled steering paired to an Allison automatic transmission offering 6×4 drive on roads and 6×6 drive over difficult terrains.