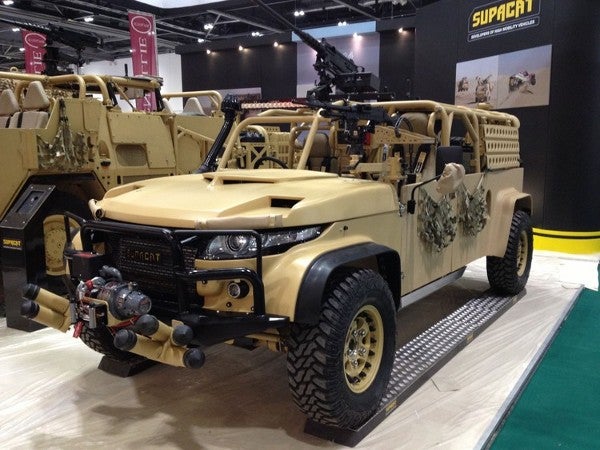 Developed from customer feedback on a proof-of-concept closed cab demonstrator, jointly developed by Supacat and Qt in 2011, LRV 400 features Wildcat’s tubular space-frame chassis and suspension, and fills the gap in the company’s product portfolio between the heavier Jackal patrol vehicle and the smaller all-terrain mobility platform (ATMP).

Supacat marketing and communications head, Jamie Clarke, said the LRV 400 addresses the gap in the military market for a light reconnaissance vehicle with an overall capability close to that of Jackal, but at less cost by adopting a commercial-off-the-shelf (COTS) approach.

"Supreme performance and tactical CH-47 internal loading have been key targets on this project. The users will be able to drive in and drive out without the need to offload their payload or to conduct any lengthy preparation for flight,” Clarke said.

"The LRV 400 addresses the gap in the military market for a light reconnaissance vehicle with an overall capability close to that of Jackal, but at less cost."

”Applying motorsport technology to defence applications is an exciting approach and one that will deliver unrivalled performance.”

Air-transportable by a CH-47 Chinook helicopter, the 3500kg vehicle has a maximum speed of 170km/h and a range of 1000km, with an ability to carry up to 1400 kg payload, depending on customer specification and configuration.

The vehicle can be fitted with an array of low-weight armour solutions, as well as communications and weapons systems according to the operators’ requirements.

Even though the vehicle was displayed in a three crew configuration of commander, driver and gunner at the exhibition, the flexibility of its space-frame design facilitates easy reconfiguration to help address different operational roles.