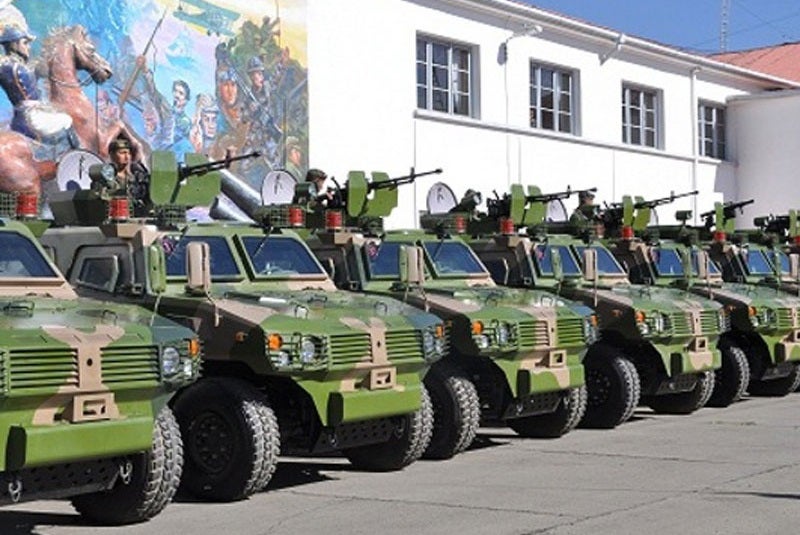 The APC configuration is designed to transport infantrymen to the battlefield with enhanced armour protection. It can be configured for various roles such as command post, law enforcement, riot control, and ambulance.

Orders and deliveries of Tiger APC

In November 2015, the Ministry of Defence of Bolivia signed a $7.7m contract with the Chinese Embassy to procure military vehicles for the Bolivian Armed Forces.

The Bolivian Armed Forces received a total of 31 armoured vehicles in July 2016. Of the 31 vehicles, the Bolivian Navy and Air Force will receive six vehicles each, including five armoured personnel carriers and one riot-control/command post. The remaining vehicles will be assigned to the Bolivian Army.

Based on the 4×4 cross-country truck chassis, the Tiger armoured vehicle is operated by a commander and a driver.

The troop compartment at the rear of the hull has three individual seats and two bench seats to accommodate up to nine fully-equipped soldiers. A large door in the rear provides entry and exit for the infantrymen.

The APC is outfitted with a self-recovery winch and one spare wheel. It can be optionally provided with night-vision capability, camera, searchlights, communications systems, and data transmission systems.

A circular turret is fitted forward at the top of the hull to engage light armoured targets and armoured personnel. It can be armed with 7.62mm or 12.7mm machine gun or 30mm automatic grenade launchers.

Fitted with an armour plate at the front and hatch pieces to the sides, the turret offers high protection for the gunner.

"The APC configuration is designed to transport infantrymen to the battlefield with enhanced armour protection."

The ballistic protection is further enhanced by armoured hull and bulletproof glass windows.

The Tiger 4×4 APC is powered by a Cummins ISDE200-30 diesel engine, generating an output power of 140kW at 2,500rpm. The engine compartment is placed at the front.

The vehicle has a maximum speed of 115km/h and can travel up to a range of 600km. It can climb grades of 60% and side slopes of 40%, and can operate in 0.8m to 1.2m deep waters. The ground clearance and turning circle diameters are 0.35m and 15m respectively.

The vehicle can cross up to 0.35m-high vertical obstacles and 0.7m-wide trenches. It offers increased mobility in all-terrain conditions.