Traditional helmets have evolved to offer ever-better ballistic impact protection, but if the head is subject to the blunt trauma or blast waves from an Improvised Explosive Device (IED) blast, traumatic brain injury can result. Impact protection solutions company D3O seeks to address this with its prototype D3O Shock Absorbing Helmet System from its Trauma Reduction and Unrivalled Shock Technology (TRUST) range, which it claims can provide up to twice the impact protection performance against blunt force trauma offered by current helmets.

The helmet system comprises three parts: a shock-absorbing liner to absorb and dissipate the energy released in the collision; an inflatable system which individually fits the solution to a range of head shapes; and a skull cap to provide additional comfort and help with sweat management. The shock absorption liner is encapsulated using D3O’s new Smart Skin technology: a wipe-clean material which provides durability and an anti-microbial barrier.

The US Army’s acquisition agency PEO Soldier recently awarded funding for a twelve-month testing programme to assess the blunt trauma characteristics of the technology fitted in helmets in impact protection tests at 14ft/s, a military standard speed.

Around 60% of the population needs spectacles or contact lenses, and military personnel are no exception, plus in sunny conditions they need sunglasses to be able to see clearly and aim straight. Ordinary eyewear can shatter, so glasses and sunglasses must meet military standard, which for the US military means it must appear on the Authorized Protective Eyewear List (APEL).

One of the most widely fielded models of eyewear is Sawfly Military Eyewear System from Revision Military. Revision was originally awarded a contract to supply 120,000 sets of Sawfly eyewear to the Canadian DND, and has since provided military eyewear for customers worldwide, including over 4 million sets supplied to the US alone. A number of military customers have also bought a version with laser protective lens capability.

The company recently released new spectacles called StingerHawk which also meet APEL standards, are made from ultra-lightweight materials and feature OcuMax Plus anti-fog coating on the lens.

Traditional helmets have an open face so soldiers can accurately aim weapons and readily use communication devices, leaving the face vulnerable to bullet wounds and blast injury. Military face shields are a new type of armour that is receiving attention, and while not yet part of standard kit, the US Army two years ago acquired a handful for testing and is reported to have since acquired thousands more. 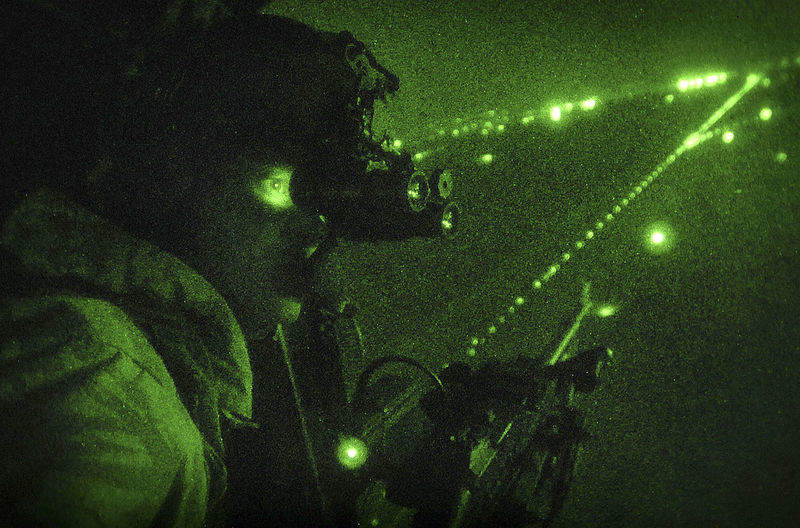 Night vision: a light in the dark?

MTek Weapons Systems makes a range of these ‘maxillofacial shields’ as they are known, including the latest in its G Series of Facial Armor SysTems (FAST), the G4 FLEX ENTRY. Compatible with the latest communications and night vision equipment, it is designed to provide protection to anyone who uses a rifle or small arms, as weapons can be held close to the face while providing a high level of ballistic protection.

It is designed to prevent or lessen grave facial injuries resulting from explosive fragmentations and rounds up to 9mm, and could lessen the risk of brain trauma. Although lightweight at just 1lb, it is still somewhat cumbersome so wouldn’t be worn by every soldier all the time, but it could decrease the risk of facial injury to the first soldier in a patrol or dangerously exposed turret gunners.

In 2012, Boston University researchers showed that supporting the head and neck to prevent violent oscillations could be more effective than head protection alone in protecting soldiers from the brain-damaging effects of an IED blast. While restraining head movements may be possible in a vehicle, it is obviously impractical on foot patrol. The researchers concluded that a solution could be one that works like a seatbelt, which only tightens during violent motion, or car airbags that activate on impact.

Revision Military has developed technology for the US Army’s Helmet Electronics and Display System-Upgradeable Protection (HEaDS-UP) programme which includes an adjustable air liner inside the helmet that can be pumped up to provide a cushion around a soldier’s head to help prevent brain injury, but would not necessarily hold the neck rigid, and would need to be manually operated.

Future military helmets could incorporate technology from a cycle helmet developed by Swedish company Hövding. Worn as a collar, sensors constantly monitor movement, and when they detect rapid changes in velocity and angle that indicate an accident, it will inflate to envelope the wearer’s head, protecting head, neck and brain.

A 2009 study by the UK Ministry of Defence found that more than two-thirds of troops returning from Afghanistan suffered severe and permanent hearing damage. Of 1,250 Royal Marine Commandos surveyed, 69% had symptoms ranging from tinnitus to almost complete deafness.

Foam earplugs are impractical and non-selective – soldiers have to remove them to operate communications equipment or communicate with other patrol members. Headphones with an automated rocker to block loud noises but allow quieter ones to be heard are often used, but they can be bulky and cumbersome.

The US Army is trialling advanced hearing protection technology called Tactical Communication And Protective System (TCAPS) with soldiers at Fort Drum in New York. TCAPS can completely shut out unexpected and painfully loud noises, such as explosions or overhead flying objects, while maintaining communication fidelity. Avoiding the problem presented by ill-fitting ear buds, TCAPS is available in six different ear canal shapes and is solar rechargeable.

Military fatigues are not considered part of a soldier’s armour, although modern fabrics have been carefully developed to protect against abrasion and cuts that could penetrate to the skin. A new fabric coating has been developed to add new levels of protection by shrugging off not just dust and grime but also water, oil and toxic chemicals.

Led by physical scientist Quoc Truong, researchers at Natick Soldier Research, Development and Engineering Center worked with Luna Innovations to develop the self-cleaning ‘omniphobic’, or everything-hating, fabric coating. As an added bonus, it has an anti-microbial additive to prevent odours. While no-one likes a stinky solider, it has a more serious element – body odour is not just embarrassing, it can give away an otherwise hidden soldier’s position.

It is more repellent to oil and toxic chemicals and ‘greener’ to produce than the Quarpel coating that has been used for the past 40 years. It is now being made commercially available and could be used on everything from outdoor wear to bank notes.

Combat body armour has probably been the subject of more frequent upgrade than any other item of armour technology, but for military personnel undertaking missions at sea, protection has always had to be a compromise with the ability to float. BCB International has addressed this with its Inflatable Body Armour System (IBAS), a jacket integrated with a life jacket containing soft armour with the option of adding hard armour, to protect the wearer from bullet and fragmentation attack.

IBAS automatically inflates within three seconds of water immersion and is self-righting in water, but inflation can be deactivated to enable the wearer to dive up to 20m deep. Available in reinforced flame retardant material, its soft armour gives approximately 500% greater protection than National Institute of Justice level 3A.

Armoured gloves have always presented a contentious issue among military wearers. Traditional designs have armoured panel inserts along the finger joints which, unless perfectly fitted, can hamper finger movement. The military users with the highest demand for protection, Explosive Ordnance Disposal technicians, do away with them altogether and just wear thin disposable blue gloves, or cut away the first two fingers and thumb of standard gloves.

One solution could come not from military researchers but from motorbike protective gear manufacturer Del Rosario. The company has made ‘articulated hand armour’ for bikers to military standards, with an obvious eye to expanding into future markets. It consists of a top hand impact protector that articulates to the rider’s hand without the need for bulk stretch panels. A ‘palm bridge’ provides impact protection for the easily-broken scaphoid bone and causes the hand to slide out during a fall, rather than have the arm and collarbone take the full impact. Finally there are abrasion and friction layers underneath, which could protect soldiers, not just bikers.

BCB International brought out its ‘Blast Boxers’ in 2012, armoured underpants made from woven Kevlar to protect the groin against IED blast fragments. Belonging to a category known as a protective under garment, they help guard against fatal or life-changing injuries such as perineal and femoral artery injuries.

The other half of the two-tier Pelvic Protection System is the protective over garment, unflatteringly referred to as a nappy. Worn over the under garment, it is more rigid, offers additional ballistic protection and protects from a greater range of fragments.

Knees may not be considered one of the most vulnerable areas of a combatant’s body, but soldiers kneel a great deal. Avoiding injury from kneeling on sharp objects and being able to get up quickly and comfortably after a long surveillance is vital. To address this, D3O will be showcasing its new TRUST High Performance Internal Knee Pad System at October’s Associated of the US Army annual meeting.

D3O worked with a military clothing manufacturer to design a novel way of integrating the knee pads into the US Army’s Active Combat Pants, using an inner pad and outer clip-on shell secured by clips through tailored holes in the fabric. Made from a lightweight foam known as Lite, with an insert made using a high performance shock-absorbing foam called D3O XT, it is designed to be far more flexible and comfortable than traditional designs and won’t slip out of place.

US soldiers are issued two types of standard Army Combat Boots – hot weather and temperate weather variants; jungle boots have not been required since the Vietnam War. With attention pivoting toward a potential future theatre in Asia Pacific, the US Army is carrying out comparative testing on a new generation of jungle boot from various manufacturers which bring a whole host of new technology to the table.

While manufacturers and models involved have not been announced, the boots will need to dry quickly after being submerged in water and not crack on drying, be lightweight and breathable to keep feet comfortable in hot and humid conditions, and provide good traction in muddy terrain.

The boot will feature ‘direct-attach outsoles’ which are glued rather than stitched to the boot. They are therefore up to a pound lighter, less likely to separate in use and reduce the shock transferred to a soldier’s foot and leg, reducing injury. Perhaps more than any other item, the final test will be solider comfort over extensive field trials.