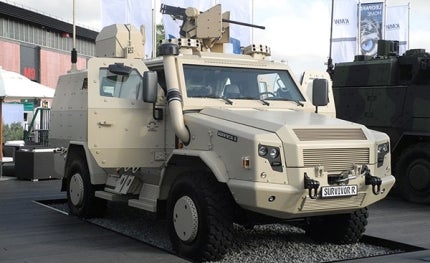 Survivor R is a medium-weight, 4×4 armoured-wheeled vehicle jointly developed by Rheinmetall MAN Military Vehicles (RMMV) and Achleitner. It was publicly displayed for the first time at the Eurosatory 2014 exhibition held at Paris, France, in June 2014.

Survivor R is the first in the family of protected, multirole vehicles produced by RMMV. It is configured for chemical, biological, radiological and nuclear (CBRN) reconnaissance roles and offers a balanced combination of mobility, protection and payload capacity. It can also be transportable inside a C-130 Hercules transport aircraft.

The Survivor R is based on the MAN TGM militarised truck chassis and automotives. It uses cost-effective, commercial, off-the-shelf (COTS) components and features an armoured monocoque cabin, which offers high-level protection and the highest internal volumes. It offers seating for two crew members and up to ten personnel in the rear.

"Survivor R is the first in the family of protected, multirole vehicles produced by RMMV."

The vehicle has a length of 6.5m, width of 2.5m, height of 2.7m and a gross weight (GVW) of 15,000kg. It can carry payloads weighing up to 4,000kg and can be integrated with a variety of mission kits and complex systems for mission-specific roles.

The Survivor R CBRN vehicle comes with a suite comprising of CBRN detection equipment. It is also fitted with an OWR sampling system, a Bruker MM mass spectrometer and a RMMV nuclear, biological and chemical (NBC) inspector. It is well-equipped to face threats, including hostile fire, assorted IED-style attacks, CBRN agents and even climatic and terrain extremes.

It is fitted with fully automated sensing devices for detecting nuclear radiation. It also includes sensors for identifying chemical warfare agents and other hazardous materials.

A remote standoff sensor aboard the vehicle can detect distant clouds of chemical agents and provides immediate analysis and warnings. The vehicle can also transmit real-time information to units deployed in the area of operations.

The vehicle can gather samples from soil, water and surface for subsequent reference analysis. It improves the survivability and mobility of the land forces, by sending all relevant CBRN information to command units and immediate marking of contaminated areas.

The vehicle is powered by a 6.9l, six-cylinder, water-cooled, MAN diesel engine. The Euro 3-compliant engine, coupled with a 12-speed automated gearbox and two-speed transfer box, produces a maximum power output of 330hp (242kW) and can generate a torque of 1,250Nm.