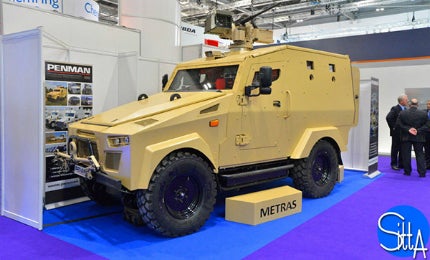 The Metras 4×4 MRV (Multi-Role Vehicle) is primarily intended for troop transport missions. It is a variant of the MRV Protected platform developed by Creation UK, a part of Penman Engineering, in cooperation with ERAF Industries for the Saudi Arabia’s military needs.

The base vehicle can be configured as a command post, ambulance, flatbed with cab and other special mission platforms. It is also available in 6×6 chassis configuration. The majority of the components for the chassis and body are manufactured at Penman’s Dumfries plant.

Metras MRV made its debut at the UK MoD’s Defence Vehicle Dynamics exhibition (DVD) 2012. It was also demonstrated at the international defence and security exhibition, DESI 2013, held in London.

Metras MRV is a flexible and lightweight vehicle designed with forward-facing configuration. It features a V-shaped interchangeable armoured steel hull structure. The modular design allows for installation of equipment required to perform a variety of tasks.

The vehicle is operated by a crew of two and can accommodate up to eight personnel. Both the driver and commander seats are located at the front section, while the soldiers are seated in the troop compartment at the rear. The vehicle is fitted with suspended seats and an HD air conditioning system for the comfort of the occupants.

Both the commander and driver enter and exit the vehicle through a door attached on each side of the cabin. The troop compartment is accessible through a large door at the rear, while the small windows are provided on both sides of the vehicle for increased visibility.

The troop transport vehicle can be equipped with Terrestrial Trunked Radio (TETRA), satellite, UHF, VHF and HF communications systems. Additional equipment including situational awareness systems, electronic devices, fire extinguishers and health and usage monitoring systems (HUMS) can also be fitted to the vehicle, as can a twin alternator and exportable power systems.

Armament and protection features of the multi-role vehicle

The Metras MRV can be equipped with a protected weapon station (PWS) / remote weapon station (RWS) to mount a 12.7mm x 99mm M2 HB heavy machine gun. Troops can also aim and fire their personal weapons through two firing ports on either side of the body.

The vehicle incorporates a V-shaped belly plate and integrated blast mitigation system. The crew cab and troop compartment can be armoured up to B7 ballistic protection levels, providing security against small arms and blasts. Also offered on the vehicle is STANAG 4569 level 3 ballistic protection, as well as Level 2a and 3b protection against explosions.

"Metras MRV is a flexible and lightweight vehicle designed with forward-facing configuration."

A five-litre, four-cylinder MAN engine is installed to power the Penman Metras MRV. The engine generates a power of 200bhp at 2,400rpm and produces a torque of 720Nm at 1,400rpm.

The vehicle is equipped with Allison five-speed, fully automatic transmission system. It can be optionally equipped with Mercedes and Toyota engines as per customer’s requirements.

The vehicle can attain a continuous speed of 90kmph and a sprint speed of 120kmph, whereas the maximum range is 800km. It has an approach angle of 45°, departure angle of 40° and a ramp-over angle of 142°. The kerb-to-kerb turning circle of the MRV is 13.0m and the ground clearance is 446mm. The vehicle is also air transportable by Hercules C 130 military transport aircraft.