Between nine seconds and three and a half minutes 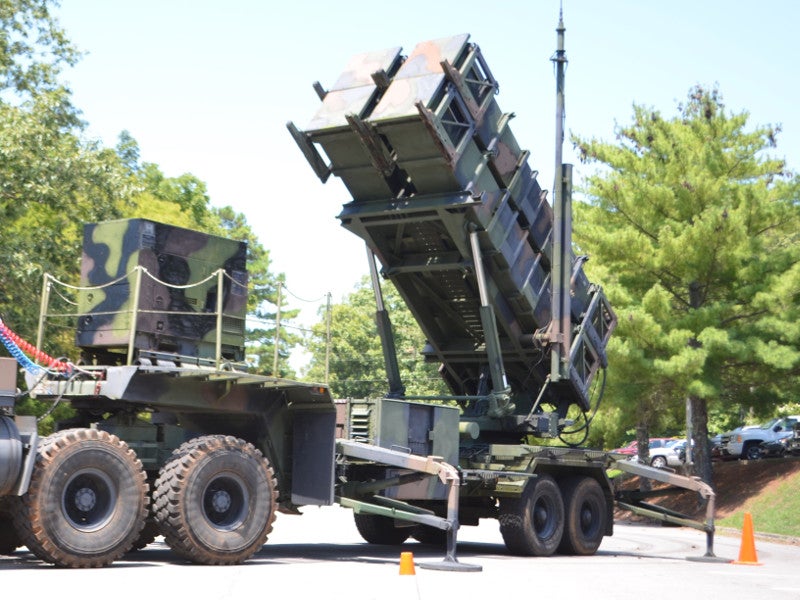 The Patriot missile system was deployed by the US during Operation Desert Storm. Credit: Ms. Kari Hawkins (AMCOM) 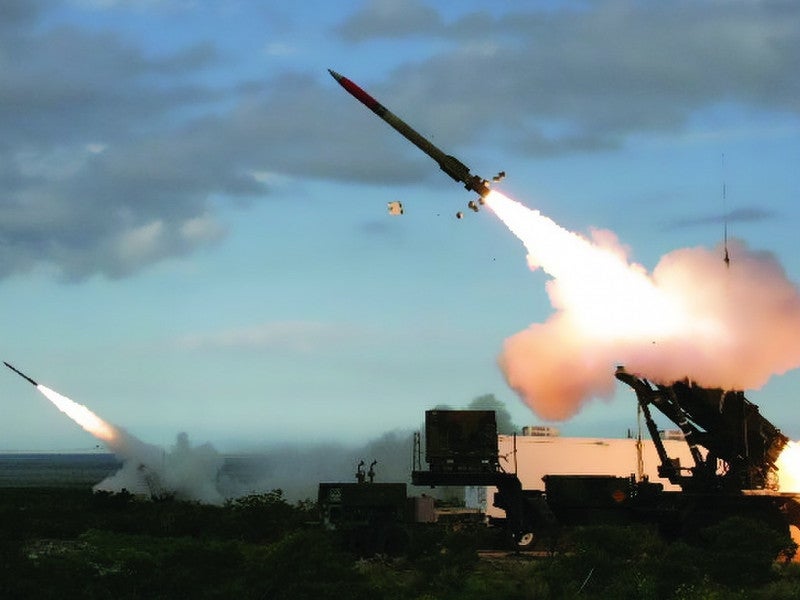 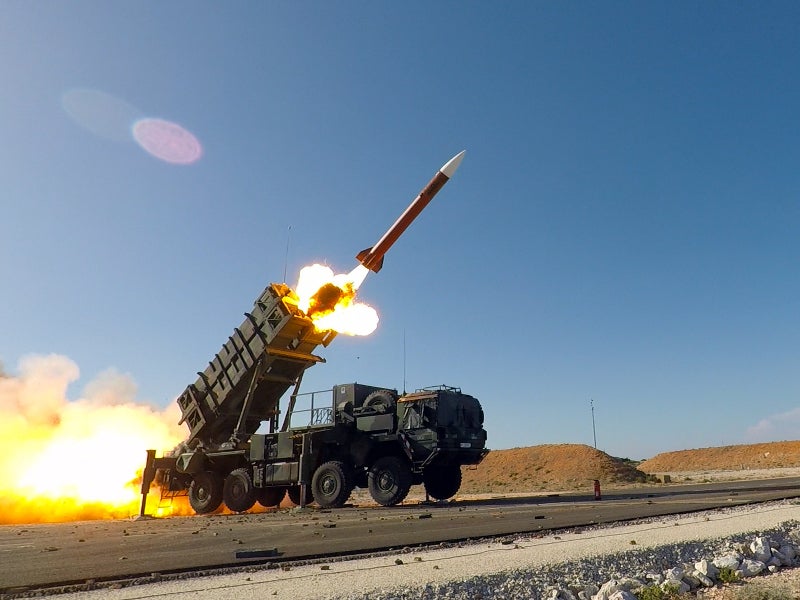 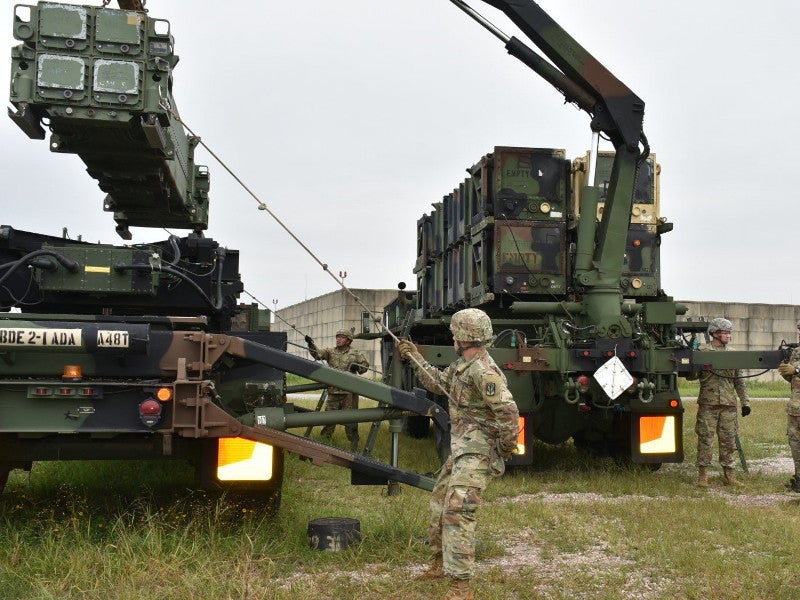 Patriot (MIM-104) is a long-range, all-altitude, all-weather air defence system to counter tactical ballistic missiles, cruise missiles and advanced aircraft. It is produced by Raytheon in Massachusetts and Lockheed Martin Missiles and Fire Control in Florida.

US forces deployed the Patriot missile systems during the 2003 Iraq conflict. The systems were stationed in Kuwait and destroyed a number of hostile surface-to-surface missiles using the new PAC-3 and guidance enhanced missiles.

The Patriot missile is equipped with a track-via-missile (TVM) guidance system. Midcourse correction commands are transmitted to the guidance system from the mobile engagement control centre.

“Patriot missile systems were deployed by US forces during the 2003 Iraq conflict.”

The missile has a range of 70km and a maximum altitude greater than 24km. The minimum flight time is less than nine seconds and the maximum is three and a half minutes.

Raytheon has developed the Patriot guidance enhanced missile (GEM-T), an upgrade to the PAC-2 missile. The upgrade involves a new fuse and the insertion of a new low-noise oscillator, which increases the seeker’s sensitivity to low radar cross-section targets.

The GEM-T missile provides an upgraded capability to defeat air-breathing, cruise and ballistic missiles, as a complement to the PAC-3 missile. The first upgrade fore-bodies were delivered to the US Army in November 2002.

By September 2010, a total of 1,000 Patriot missiles had been upgraded for the US Army.

In April 2011, US Army Aviation and Missile Command awarded a $58.3m contract to upgrade 131 PAC-2 missiles to GEM-T missile configuration.

A new Patriot advanced capability (PAC-3) missile has increased effectiveness against tactical ballistic and cruise missiles through the use of advanced hit-to-kill technology. Lockheed Martin is the primary contractor, with Raytheon as the systems integrator. The PAC-3 has a Ka-band millimetre wave seeker developed by Boeing.

The missile guidance system enables target destruction through the kinetic energy released by hitting the target head-on. 16 PAC-3 missiles can be loaded on a launcher, compared to four PAC-2 missiles.

PAC-3 entered low-rate initial production in late 1999 and the first LRIP production missiles, reaching a total of 92, were delivered in September 2001. A contract for 88 missiles was placed in December 2002 and another for 12 in March 2003.

The missile was first deployed during the Iraq conflict in March / April 2003. In February 2004, Lockheed Martin was awarded a production contract for 159 PAC-3 missiles, which includes 22 missiles to replace those expended in Iraq. Deliveries were concluded by April 2006.

A further contract for 156 missiles was received in February 2005. Approximately 32 of these missiles are for the Netherlands and 16 are for Japan, under foreign military sales (FMS) agreements. The Netherlands received the first PAC-3 missiles in October 2007. The US Army ordered another 112 missiles in May 2006 and 112 in March 2007.

Lockheed Martin was awarded a contract in January 2007 for the risk reduction / concept definition of a programme for an air-launched Patriot PAC-3 missile system. The F-15C fighter is the first aircraft to be fitted with the system.

The US Army placed several contracts totalling $921m in January 2012 for the PAC-3 missiles and associated systems. A $755m contract for 168 PAC-3 missiles, 27 launcher modification kits and related equipment and services was placed in January 2013.

In April 2014, the US Army Aviation and Missile Command awarded a $611m contract to Lockheed Martin for the production of the first PAC-3 missiles with launcher modifications kits.

The US Army Aviation and Missile Command placed a $212m contract with Lockheed Martin to provide PAC-3 maintenance and surveillance services to the US and international customers in July 2014.

In October 2014, Lockheed Martin was selected by the Qatar Government to produce PAC-3 missile and command launch system for the Qatar Air Force. In the same month, the US State Department approved a possible foreign military sale of 202 Patriot air defence systems with PAC-3 enhancement and support equipment to the Kingdom of Saudi Arabia at an estimated cost of $1.75bn.

The US State Department approved a possible FMS of PAC-3 missiles and support equipment to South Korea at an estimated cost of $1.405bn in November 2014.

The US and allied military forces awarded a $1.5bn contract in July 2015 and a $1.1bn contract in December 2015 for the production and delivery of PAC-3 and PAC-3 MSE missiles.

Lockheed Martin received a $1.45bn contract from the US and allied military forces for the production and delivery of PAC-3 and PAC-3 MSE missiles in December 2016.

Two contracts worth $944m and $524m were awarded by the US Government in December 2017 and February 2018 for the PAC-3 and PAC-3 MSE interceptors respectively.

Lockheed Martin received a $506.9m modification contract from the US Army Contracting Command, Redstone Arsenal, for the production of PAC-3 missiles in March 2019.

The PAC-3 missile segment enhancement (MSE) is part of a spiral development being undertaken by Lockheed Martin.

The increased range MSE gives the missile a more powerful rocket motor for added thrust and larger fins for increased manoeuvrability against faster and more sophisticated ballistic and cruise missiles. The MSE began flight testing in May 2008.

The PAC-3 MSE is the baseline interceptor for the multinational medium extended air defence system (MEADS) under a contract placed in February 2008. The missile was test fired using the Patriot system in May 2011. Lockheed Martin was awarded a $68.9m contract in July 2012 to prepare the PAC-3 production line for the PAC-3 MSE missile.

The US Army Aviation and Missile Command awarded a $308m contract modification to Lockheed Martin for hardware and services associated with the PAC-3 missile segment programme in August 2013.

Lockheed Martin received the first production order worth $611m from the US Army for PAC-3 MSE missiles in April 2014. The first interceptor under the contract was delivered to the US Army in October 2015.

The PAC-3 MSE achieved initial operational capability in August 2016 and entered the full rate of production stage in November 2017.

An agreement was signed between the Swedish and US Governments for the delivery of PAC-3 missiles in August 2018.

In March 2018, the Government of Poland selected Lockheed Martin for the delivery of PAC-3 MSE missiles and associated equipment.

The US and its foreign military sales partners awarded a $1.8bn contract to Lockheed Martin in December 2018 for building and delivering PAC-3 and PAC-3 MSE interceptors. The contract also includes the delivery of modification kits and associated equipment.

The M901 launching station transports, points and launches the Patriot missile. Each launcher has four missiles. The launcher is remotely operated via a VHF or fibre-optic data link from the engagement control station, which provides both the missile pre-launch data and the fire command signal.

The AN/MSQ-104 x control station is the only manned station in a Patriot fire unit. The control station communicates with the M901 launching stations, other Patriot batteries and the higher command headquarters.

The control station is manned by three operators using two consoles and a communications station with three radio relay terminals. The digital weapon control computer is located next to the VHF data link terminals.

Modern Man Stations (MMS) is an upgrade to the Patriot command and control system. It provides full-colour graphical UI along with LCD displays.

The AN/MPQ-53 phased-array radar carries out search, target detection, track and identification, missile tracking and guidance, and electronic counter-countermeasure (ECCM) functions. The radar is mounted on a trailer and is automatically controlled by the digital weapons control computer in the engagement control station via a cable link. The radar system has a range of up to 100km, the capacity to track up to 100 targets and can provide missile guidance data for up to nine missiles.

Raytheon is upgrading the US Army Patriot radars. The upgrade kits provide greater power for the radar and the addition of wideband capability for improved target discrimination.

Target engagement can be carried out in manual, semi-automatic or automatic modes. When the decision has been made to engage the target, the engagement control station selects the launch station, or stations, and pre-launch data is transmitted to the selected missile. After launch, the Patriot missile is acquired by the radar.

The command uplink and the TVM downlink allow the missile’s flight to be monitored and provide missile guidance commands from the weapon control computer. As the missile approaches the target, the TVM guidance system is activated and the missile is steered towards the target. A proximity fuse detonates the high-explosive warhead.

Raytheon received a $235.5m contract to improve the Patriot system with radar digital processor (RDP) kits for the US and two partner nations in July 2014. The US Army Aviation and Missile Command awarded a $109m engineering services contract to Raytheon for its Patriot system in September 2014.

In March 2014, Raytheon received a $655m contract from the US Army Aviation and Missile Command for providing new-production Patriot system fire units to Kuwait.

The US Government approved the export of a Gallium Nitride (GaN) based active electronically scanned array (AESA) Patriot sensor to system partner nations in February 2015.

In April 2015, Raytheon received a $2bn international order to provide fully digitised, new-production Patriot fire units with the latest technology for enhanced threat detection, identification and engagement. In the same month, the Patriot system was selected by Poland for its Wisła integrated air and missile defence programme.

Raytheon received a $212m contract from the US Army for the improvement of Patriot air and missile defence system in April 2015.

Raytheon was awarded a $255m contract from an undisclosed customer for enhancing Patriot missile defence capability in October 2016.

The Royal Netherlands Defence Materiel Organisation awarded a contract to Raytheon for a Patriot missile system with Modern Man Stations interface in October 2016.

Romania signed an agreement with the US Government for Patriot air and missile defence system in November 2017. Raytheon was awarded a $395.8m contract to build a Patriot fire unit for Romania in May 2018. The country requested three additional Patriot systems in November 2018.

Raytheon was awarded a contract worth $1.5bn by the US Army to build and deliver four Patriot fire units for Poland in September 2018. The contract was awarded as part of phase one of Poland’s Wisła, a two-phase medium-range Integrated Air and Missile Defence procurement programme.

In December 2018, Sweden awarded a $692.9m contract to Raytheon through the US Army’s contract foreign military sales programme for production and delivery of an undisclosed number of Patriot fire units, along with GEM-T interceptor missiles.