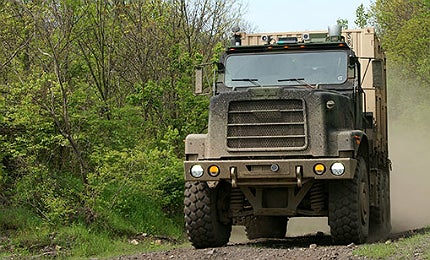 In February 2013, Oshkosh introduced its TerraMax UGV technology to the international market, at IDEX (International Defence Exhibition and Conference) 2013. The US military plans to operate one-third of its functional ground combat vehicles as unmanned by 2015.

"In February 2013, Oshkosh introduced its TerraMax UGV technology to the international market, at IDEX."

TerraMax was developed by Oshkosh in cooperation with Rockwell Collins and the University of Parmay.

Oshkosh Defense introduced the TerraMax UGV technology aboard the 6×6 MTVR-based tactical cargo hauler in the 2004 Defense Advanced Research Projects Agency (DARPA) Grand Challenge. TerraMax is the first tactical defence truck to ever reach the final line of the DARPA Challenge.

Oshkosh was awarded a contract for the development of the TerraMax integrated cargo UGV in June 2010. The contract was awarded by US Marine Corps Warfighting Laboratory (MCWL) and the Joint Ground Robotics Enterprise Robotics Technology Consortium.

The first evaluation for the cargo UGV was completed in May 2011 at Fort Pickett. The sensor system and self-direction software of the TerraMax are developed by Oshkosh in association with the National Robotics Engineering Centre of Carnegie Mellon University.

TerraMax UGV technology was demonstrated for the MCWL, the Office of the Secretary of Defence, the Department of Transportation and the Robotic Systems Joint Project Office in October 2012.

The modular kit of TerraMax is designed to be integrated into any tactical wheeled vehicle. The UGV suite consists of command zone electronics and a sensor suite incorporating a LIDAR (light detection and ranging) system, vision, navigation and an advanced operator control unit (OCU).

Hardware components of TerraMax are well placed in the vehicle to complement the combat requirements of soldiers, while maintaining the utility of the vehicle. The TerraMax UGV technology is fully incorporated into the brakes, steering, engine and transmission, to enable advanced driver assist systems.

The TerraMax mounted ground vehicles can be operated fully autonomously in any position in the convoy, or semi-autonomously to follow the path of the lead vehicle.

"Oshkosh was awarded a contract for the development of the TerraMax integrated cargo UGV in June 2010."

The sensor systems allow the operators to alter the composition of the convoy according to the traffic conditions, road blocks or obstacles.

The short-range radars provide 360° close-view for the detection and avoidance of obstacles. It ensures safe convoy missions in rugged environments.

The military grade global navigation satellite system (GNSS) along with map registration software technology ensures the operation of the system without a satellite signal where a global positioning system (GPS) navigation system is blocked or denied.

The vehicle mounted with TerraMax UGV technology is autonomously controlled by an operator control unit (OCU). It enables the operators to manipulate route information and look out or manage internal operations and status of autonomous systems over tactical data links.

The teleoperated OCU shows the necessary information according to the priority and facilitates the fast input of commands to maintain the pace in convoy operations. The screen of OCU displays overhead imagery, automated routes and driving parameters. It gives feedback if it identifies an obstacle to continue, or changes track accordingly.

The rugged OCU allows a single operator to control one or more UGVs. The operator can control an UGV with infrequent monitoring of the unit. The user-friendly interface of the OCU can be easily learnt by the operators.

The Medium Tactical Vehicle Replacement (MTVR) is a family of all-terrain cargo trucks manufactured by Oshkosh for the US Navy and US Marine Corps.