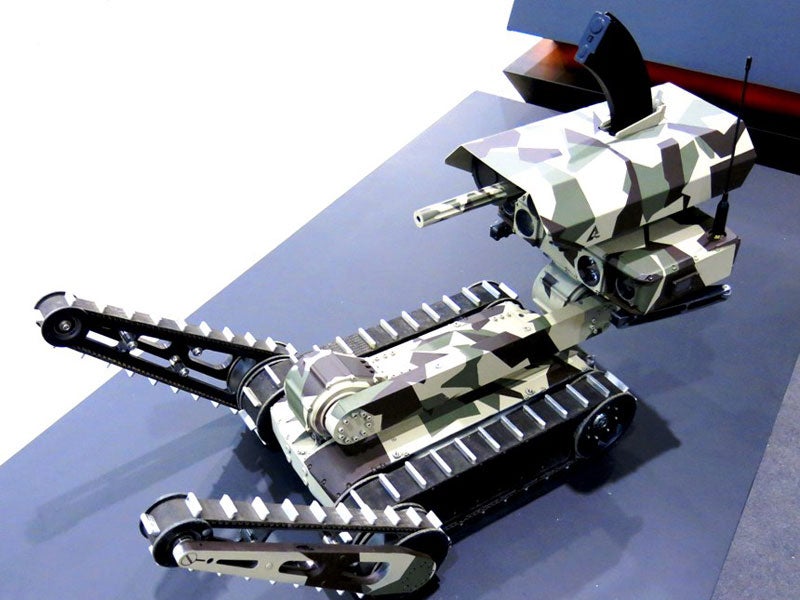 The minirex lightweight tactical robot is developed by Lobaev Robotics, which is owned by Russian weapons manufacturer KB Integrated Systems. Unveiled in December 2015, the robot is designed for use by the special forces and assault teams in combat, search and rescue, demining, and counter-terror missions in urban warfare conditions both during the day and at night.

It can also be used as mobile fire support unit to assist police and other special operations. It is capable of travelling through difficult terrain conditions and can navigate both indoors and outdoors.

The minirex vehicle recently took part in the Interpolitex 2016 international defence and security show held in Russia during October 2016.

Weighing approximately 23kg, the Minirex small tactical robot is based on the tracked chassis with a robotic lifting arm.

The robotic arm is fitted with a number of optronic sensors and weaponry, is transportable in a backpack and can lift loads weighing up to 3kg. Mounted on the top of the robotic arm, the firing unit can reach a height of 1.4m.

The unmanned vehicle also features a hand-manipulator that is used to lift loads. A meteorological station can be provided optionally for collecting real-time meteorological information.

The camera is used to capture pictures of obstacles in real time, whereas the laser scanner is intended to identify and detect obstacles at far distances. The onboard stereovision sensor provides the robot with navigation and obstacle detection.

The robot is additionally fitted with four cameras for 360° surveillance, and a global positioning system (GPS) or global navigation satellite system (GLONASS) for real-time positioning.

The minirex tactical robot’s firing module supports both lethal and non-lethal types of rounds. It is armed with a 7.62mm x 39mm calibre weapon, which can hit targets at a distance ranging from 1m to 400m. The rifle cartridges are loaded into the weapon using a standard AK magazine loader.

The weapon also supports SP-6 9mm x 39mm, .338LW (Lobaev Whisper) and .40LW cartridges. The standard version has a barrel length of 0.4m, whereas the barrel of the assault configuration is 0.2m-long.

The firing module is controlled by the onboard firing management system or ballistic calculator. The robot is sealed and shock-resistant.

Certified to IP68 rating, the Minirex robot is protected against ingress of water to a depth of 1m.

Operation and control of the minirex unmanned tactical vehicle is performed by two crew members.

"Unveiled in December 2015, the robot is designed for use by the special forces and assault teams in combat, search and rescue, demining, and counter-terror missions in urban warfare conditions both during the day and at night."

The robot can fire both lethal and non-lethal rounds in either automatic or semi-automatic modes.

Powered by rechargeable batteries, the minirex tracked combat robot can travel at a speed between 5km/h and 8km/h and operate in temperatures ranging between -35°С and 45°С.

The robot can execute surveillance missions for a period of 15 hours, while its autonomy for assault missions is six hours.

It has the ability to operate in dust, snow and rain, as well as in unstructured environments.

PIAP
PIAP is a Polish designer and producer of EOD/IEDD robots...
SUBSCRIBED