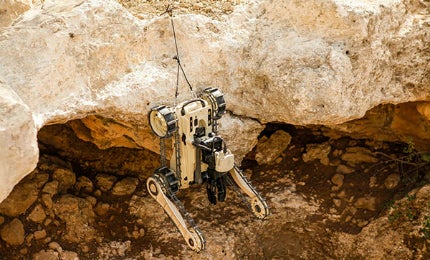 The Micro Tactical Ground Robot (MTGR) is manufactured by ROBOTEAM. It is a lightweight, tactical vehicle with high manoeuvrability that can be used in all terrains and both indoors and outdoors. It is a handheld system that can be carried by an individual soldier.

The vehicle was first displayed to the public at the Association of United States of Army (AUSA) exhibition held at Washington DC in October 2013.

The MTGR system was designed and developed for harsh field conditions. It includes a platform with a 4-DOF manipulator, and ruggedised operator control unit 7 (ROCU-7) with touch-screen operator console and gamepad controllers.

A maximum gripper force of 186N can be exerted by the manipulator for a 4.3 inch (11cm) gripper opening. The robotic system has a maximum lift capability of 11lb (5kg) when fully extended, with a reach length of 19.3in (49cm).

The MTGR EOD system is currently used by special forces, and tactical and urban warfare units. It can carry out reconnaissance missions, identify objects from far distances, locate designated targets and breach a compound or simply observe from a hill top.

"The MTGR system was designed and developed for harsh field conditions."

A public safety variant of the system is suitable for law enforcement, fire departments, HAZMAT and CBRNE units, as well as other security needs. It can be used in numerous tactical missions involving urban warfare and for the inspection of foreign and hazardous objects.

An internal GPS is included with the MTGR system, as is mechanical interfaces standard picatinny rails, and a secured IP MESH data link. It also includes a camera offering 360° real-time day-and-night video with zoom, and day-and-night vision for uninterrupted mission control and manoeuvrability in any terrain. It includes a drive camera tilt module with tilting angles of -20° to +90°.