7.9kg with battery and detector cooling 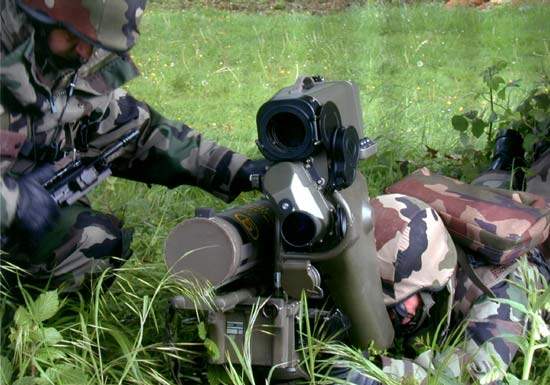 The MILAN 3 missile system can be fitted with a new-generation MILIS thermal sight from SAGEM. 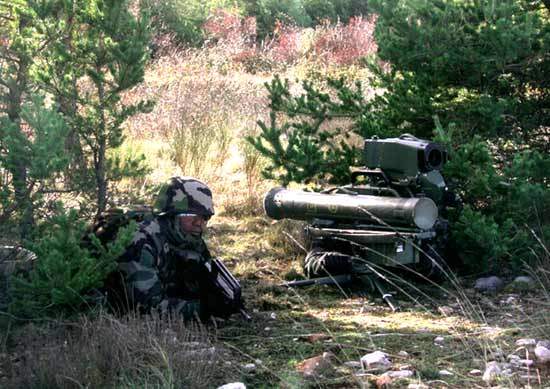 The MILAN 3 has a new CCD localiser which provides increased jamming resistance.

The latest version MILAN 3, which has improved anti-armour and anti-jamming capability, has been in production since 1996.

The Milan weapons system is operated by a crew of two.

Various mounting installations enable MILAN to be used from any vehicle either placed with the tripod on the roof or secured by using a quick-release clamp.

The firing post consists of a sighting system and a guidance assembly mounted on a tripod.

MILAN is a portable medium-range, anti-tank weapon manufactured by Euromissile, based in Fontenay-aux-Roses in France. Euromissile is a consortium originally set up by Aerospatiale-Matra of France and DaimlerChrysler Aerospace of Germany, now a subsidiary of the EADS Company.

The missile system activities of Aerospatiale Matra have been merged with Matra BAE Dynamics and Alenia Marconi Systems to form MBDA. The system has also been built under licence by Bharat Dynamics in India.

The system was developed for the French and German Armies and over 360,000 missiles and 10,000 launch units have been produced since 1972. MILAN is in service in 41 countries.

MILAN 3, armed with a tandem warhead with a new firing post with jam-resistant pulsed-beacon infrared guidance, has been in production since 1996 and has been ordered by France, Cyprus and two other armies.

The Defence Acquisition Council of India approved the acquisition of 5,000 MILAN anti-tank guided missiles in January 2019.

MILAN ADT/ER is the latest version of the missile system with new digitised firing post and new extended-range missile.

The MILAN ADT firing post has an integrated thermal imager with a video output which allows remote operation. With two missiles, the ADT weighs less than 45kg. The first guided firing of the missile took place in May 2006. The first test of the complete system, firing post and missile, took place in October 2006. The ADT firing post was qualified by the DGA in January 2007 followed by a successful series of evaluation trials completed in March 2007.

The MILAN ER missile has a range extended to 3,000m and a new, multi-effect warhead which can penetrate 1,000mm explosive reactive armour (ERA) or rolled homogenous armour (RHA), or more than 3m of reinforced concrete. A direct attack mode has been added as well as improved anti-jamming capability.

The munition consists of the missile in a waterproof launch tube. MILAN 2 has a single shaped charge warhead for use against very thick and composite armour. MILAN 2T and MILAN 3 missiles are armed with a tandem charge for use against reactive armour.

The missile’s Artus propulsion system is a dual system supplied by Société Nationale des Poudres et Explosifs (SNPE) of France, now Eurenco. Eurenco is a company formed from the merger of the explosives and propellants operations of SNPE, Saab and Patria.

“MILAN ADT has an integrated thermal imager with a video output which allows remote operation.”

The first stage burns for 1.5s to eject the missile from the launcher to a distance of about 3m, and then the second stage burns for 11s giving a speed of over 200m/s and maximum range of 2km for a 12.5s time-of-flight.

The firing post consists of a sighting system and a guidance assembly mounted on a tripod. The infrared localiser measures the angular deviation between the missile and the line of sight to the target. The transmission of guidance data by wire and the new MILAN 3 CCD localiser provide jamming resistance.

All existing MILAN firing posts can be easily upgraded to MILAN 3 firing posts, which can fire all MILAN missiles.

The firing post can be equipped with an optional MIRA thermal sight, produced by Thales (formerly Thomson-CSF) Optronique. MIRA has a detection range of 4,000m and field of view of 6° x 3°. The mounting bracket is quickly set up without tools or modification to the MILAN firing post. No correlation between the thermal sight and the firing post is necessary.

A new-generation thermal sight has been developed for the MILAN 3 firing post, the MILIS from Safran (formerly SAGEM), which has a dual field of view, a detection range of 7km and a recognition range of 2.5km.

The gunner places the sight mark on the base of the target and presses the firing button. The missile is launched from the launch container and the launch tube is ejected to the rear of the launcher. The launcher can then be reloaded.

Immediately after launch the fins on the missile open to provide a stabilising roll to the missile. After the missile is clear of the gunner, the sustainer rocket ignites.

The gunner tracks the target simply by maintaining the position of the sight reticle centred on the target during missile flight.

During flight the missile is automatically slaved at about 0.5m above the line-of-sight to avoid obstacles. The explosion of the charge occurs at the moment of impact with the target, even at high angles of incidence up to 80º. The rate of fire is up to three rounds a minute.

Various mounting installations enable MILAN to be used from any vehicle either placed with the tripod on the roof or secured by using a quick-release clamp. Twin turrets have been developed for tracked vehicles allowing the missiles to be fired under armour.