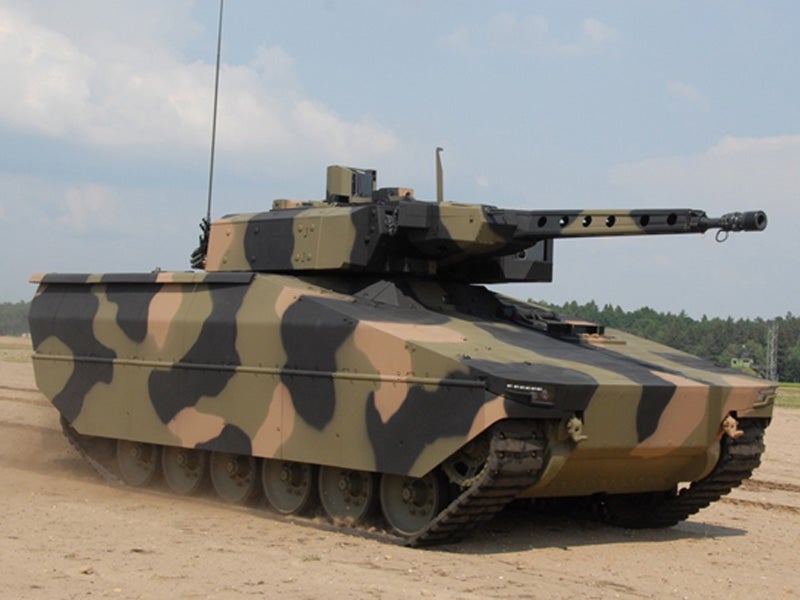 The Lynx infantry fighting vehicle (IFV) is a state-of-the-art, highly protected, tracked armoured vehicle developed by Rheinmetall. The IFV was unveiled for the first time at Eurosatory 2016 exhibition held in June 2016.

The Lynx IFV is offered in two configurations, Lynx KettenFahrzeug (KF) 31 and KF 41. The KF 31 weighs up to 38t and accommodates three crew and six troops, whereas the KF 41 is an extended version with a capacity to carry three crew and eight infantrymen.

Both variants can be configured as command and control, armoured reconnaissance, repair and recovery, and ambulance vehicles.

Design and features of Lynx IFV

The Lynx IFV is based on a highly modular design concept, allowing for the integration of special mission kits to produce a specific variant. The mission kit comprises a specific roof, mission-specific installations and equipment.

The monocoque hull design of Lynx IFV houses power-pack in the front and exhaust system at the rear. Driver’ position is located on the left front side of the hull, whereas the crew is seated in a mission-neutral space.

The commander, gunner and driver are provided with hatch covers to enter and exit the vehicle. Crew can also ingress and egress the vehicle through the hydraulically-operated rear ramp. The vehicle also has a roof hatch at the rear of the crew compartment, which acts as an observation point and emergency exit.

The Lynx IFV is mounted with a Rheinmetall LANCE turret armed with a stabilised and externally-powered 30mm or 35mm automatic cannon. The turret allows the crew to effectively engage targets at a maximum distance of 3,000m.

The IFV can also be armed with an anti-tank guided missile (ATGM) launcher and a secondary remotely controlled weapon system mounted with a 7.62mm co-axial machine gun. The secondary weapon station is connected to the main optics.

Each EO sight can be operated by both the commander and the gunner; one of them ensures all-round visibility irrespective of the turret motion. The turret can be integrated with a situational awareness system (SAS), an additional commander’s sight, a laser warning system (LWS), an independent weapons station, an acoustic shot locator system and C4I systems.

The fully digital fire control system of LANCE ensures a high-precision rate of fire of 200 rounds a minute.

"The Lynx IFV is based on a highly modular design concept, allowing for the integration of special mission kits to produce a specific variant."

The interior of the vehicle also incorporates a spall liner for additional protection against potential threats. The vehicle is also offered with mine and IED protection packages and decoupled seats for add-on protection.

The vehicle is optionally equipped with hard kill active defence system (ADS) for 360° passive protection against a wide range of attacks. The Rheinmetall SolarΣShield mobile camouflage system aboard the vehicle further reduces heat loading, as well as infrared, visual and radar signatures.

The Lynx IFV is powered by a new generation COTS diesel engine, which develops a power output of 560kW (750hp) for the KF 31 and 800kW (1,050hp) for the KF 41 variant. The engine is coupled to a fully-automatic transmission system.

The forward hull integrates final drives, whereas the rear houses the idler sprockets with track tensioners. The running gear constitutes six road wheels per side, on either rubber or light metal tracks. The vehicle has a maximum speed of 70km/h.

The Lynx IFV can negotiate gradients of up to 60° and lateral slopes of 30°. It has the ability to cross ditches up to 2.5m-wide, ford water streams of up to 1.5m-deep and climb 1m-high vertical obstacles.