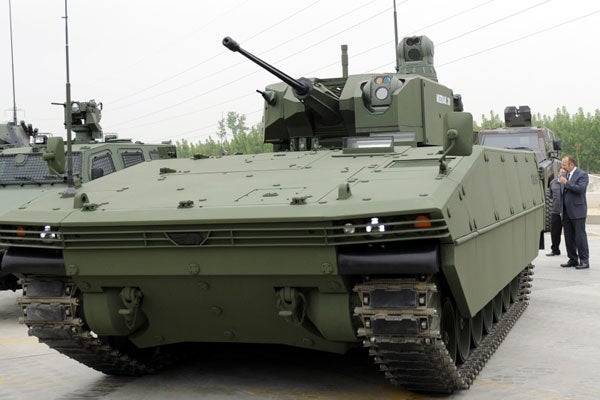 Tulpar is a multi-purpose armoured infantry fighting vehicle (IFV) designed and manufactured by Otokar Otobus Karoseri Sanayi (Otokar) for the Turkish Armed Forces. The vehicle was unveiled at the International Defence Industry Fair (IDEF) in May 2013.

The Tulpar IFV is designed primarily to safely transport infantry to the battlefield. It can, however, be used for other purposes such as urban and peacekeeping missions too.

The vehicle is fitted with an air conditioning system to minimise the crew fatigue.

The vehicle offers superior fire support and mobility. It can be transported by Airbus A400M military transport aircraft and can carry a payload weighing between 30t to 45t.

"The vehicle is fitted with an air conditioning system to minimise the crew fatigue."

Armament and protection features of Tulpar

The Tulpar is equipped with Mizrak remote controlled turret system armed with a 30mm dual-fed automatic gun and a 7.62mm coaxial machine gun.

A full range of electro-optic sensors are mounted on the Mizrak turret to provide the crew with 24-hour visibility in all weather conditions. The 30mm main cannon has an ammunition capacity of 210 rounds, while the machine gun can be loaded with up to 500 ready-to-fire rounds. The new generation digital fire control system optimises the firing accuracy.

The externally-mounted 30mm gun can fire within an elevation of +60° and depression of -10º. It has 360° turret traverse. A cooled thermal charge-coupled device (CCD) day camera mounted on the IFV’s commander and gunner sights enables the observation of targets.

"The vehicle can also be fitted with four smoke grenade dischargers on each side of the turret."

The vehicle can also be fitted with four smoke grenade dischargers on each side of the turret. The turret can be optionally armed with L-UMTAS long range anti tank missiles.

The Tulpar IFV is powered by Scania DSI 14l or 16l V8 turbocharged diesel engine, which produces a power of 810hp at 2,150rpm. It is mated with 32-speed automatic transmission SAPA SG-850. The power to weight ratio of the vehicle is 25.3hp/t.

The vehicle provides superior all-terrain mobility running on seven dual rubber-tyre wheels on each side. It can accelerate to a speed of 32km/h in six seconds and accomplish a maximum speed of 70km/h on roads. The running gear includes a drive sprocket at the front and an idler at the rear. The armour plates provide protection for the upper part of the suspension.

The IFV can reach a maximum range of 600km on road. It can negotiate a gradient of 60% and side slope of 40%. It is capable of crossing vertical obstacles of 0.8m and trenches of 2.6m.

The Dardo Hitfist infantry fighting vehicle, in production for the Italian Army, is designed and manufactured by the Iveco Fiat Oto Melara Syndicated Company based in Rome.

The Projekt Systems and Management (PSM) consortium, based in Kassel in Germany, is developing the Puma tracked armoured infantry fighting vehicle (AIFV) for the German Army under a programme authorised by the German Federal Parliament in 2002.