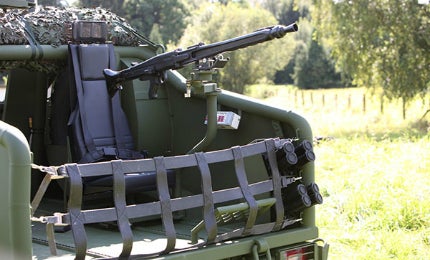 The Special Operation Vehicle (SOV) is an open-topped light armoured vehicle developed by Krauss-Maffei Wegmann (KMW). The vehicle can be used for long-range reconnaissance and special operations.

The SOV was showcased at MSPO in September 2014. It was tested by German and Austrian Special Forces. The vehicle can be internally transported in a CH 47 Chinook or a CH-53 Sea Stallion.

A Light Infantry Vehicle for Special Operations or LIV (SO) Serval is a German reconnaissance and combat vehicle developed by Rheinmetall Land Systems (RLS).

Bremach and Krauss-Maffei Wegmann began the development of the SOV in 2012. The vehicle is based on Bremach heavy-duty chassis, which offers ballistic protection and underside mine protection. It was integrated by AMZ Kutno and the first prototype was completed by June 2014.

The vehicle measures 4.9m long, 1.9m wide and 2.6m high, and can accommodate three to six personnel. Its modular design allows for the development of different mission variants, including an armoured personnel carrier with an open roof, a fully-armoured pick-up, an armoured vehicle with flatbed, and a vehicle with enclosed protected cabin.

The SOV features an innovative folding roll-bar that reduces the preparation time for airlifting the vehicle in less than two minutes time. It is air-transportable with weapons stay-mounted for immediate combat readiness operations. The vehicle includes a 5t self-recovery electric winch with 25m steel rope.

Three weapon mounts feature on the vehicle. These include auxiliary front and rear mounts, which can be fitted with a number of weapons, including a 12.7mm machine gun or a 40mm automatic grenade launcher on the main ring mount for gunner and two 7.62mm or 5.56mm machine guns on pedestal mounts.

"The SOV is based on Bremach heavy-duty chassis, which offers ballistic protection and underside mine protection."

The vehicle features a high-placed crew area that provides excellent survivability against improvised explosive device (IED) and mine explosions.

Engine and performance details of the SOV

The vehicle is powered by an IVECO 3-litre turbocharged diesel engine, which develops 125kW (400Nm) of power. The power-pack ensures a maximum speed of 130km/h and a combat range of 900km.

Mobility of the SOV

The vehicle offers cross-country mobility with high off-road performance and well balanced power-to-weight ratio. It has a turning radius of less than 13m. The wheels are fitted with 255 / 100 R16z oponami run flat tyres. The front and rear slope angles of the vehicle are 42° and 37°, respectively.