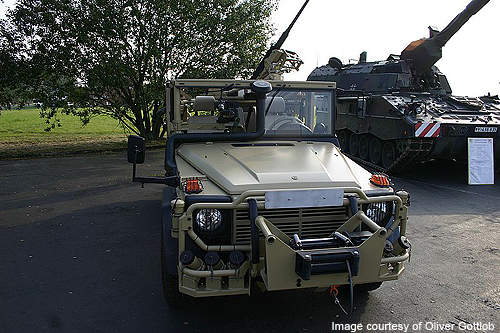 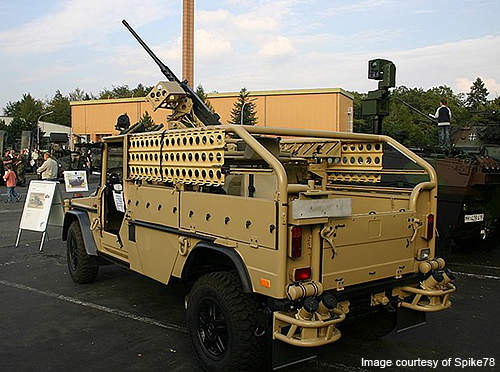 A rear-side view of the Light Infantry Vehicles-Special Operations LIV (SO) Serval. 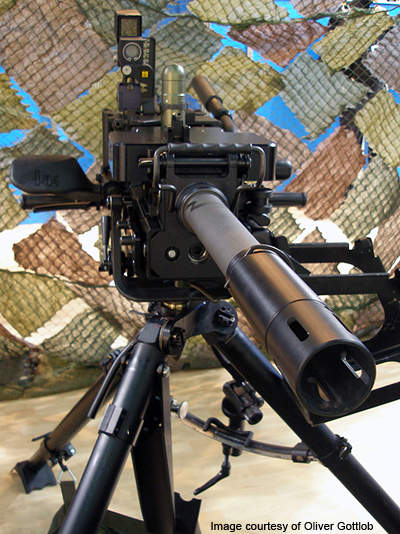 The RLS 609 K weapon station fitted on the LIV (SO) Serval can mount a Heckler and Koch 40mm grenade machine gun.

A Light Infantry Vehicle for Special Operations or LIV (SO) Serval is a German reconnaissance and combat vehicle developed by Rheinmetall Land Systems (RLS), a division of Rheinmetall Defence. The vehicle was designed for the special operations forces of the German Army and the armed forces of friendly nations. The vehicle is also referred to as Wolf AGF.

The Serval reconnaissance and combat vehicle demonstrates high mobility and reliability in the battlefield. The light armoured vehicle is easily air-portable and can be quickly deployed over all terrains.

Germany’s Ministry of Defence placed a contract with Rheinmetall for 21 LIV (SO) vehicles in March 2002. Rheinmetall was to deliver the first prototype vehicle within 10 months due to the immediate requirement of the armed forces. The first vehicle was displayed at the International Defence Exhibition (IDEX) in Abu Dhabi in March 2003.

Deliveries began in January 2004 and the final vehicle was delivered to the German Special Forces by June 2004. The Swiss Army also acquired modified LIV (SO) vehicles in 2007.

The Serval was designed based on the Mercedes-Benz G 270 CDI chassis. The wheelbase and gross vehicle weight were increased for the LIV (SO) role. The conventional layout houses an open light armour body behind the open cab.

The vehicle has sufficient space for accommodating troops and payloads. The body and frame were supplied by Binz. The frame was designed to provide roll-over protection. The modular design allows modifications for increased protection and fire power. The vehicle is fitted with a front electric winch and a trailer hitch.

The gross vehicle weight of the Serval is 4.7t and its payload capacity is 1.2t. The vehicle has a length of 5.6m, width of 2.5m and height of 2.3m. It can carry a four-person crew.

The Serval is fitted with the RLS 609 K weapon station for mounting weapons such as a Heckler and Koch 40mm grenade machine gun or .50 calibre heavy machine gun.

The LIV (SO) protects the crew from hand grenade blast. The side-mounted drive trays provide protection from splinters. The protection levels can be improved with the optional body panels. The add-on armour provides partial ballistic and hand grenade splinter protection.

The non-armoured windscreen panels can be replaced with armoured glass panels. The floor area can be fitted with additional armour to counter anti-personnel mine blasts. The smoke grenade launcher systems at the forward and rear of the vehicle improve the survivability.

The Serval is powered by a 2.685l five-cylinder diesel engine coupled to a Mercedes-Benz five-speed Touchshift automatic transmission and two-speed transfer box. The engine complies with the Euro 3 emission standards and can tolerate low-grade fuel. It can deliver a maximum power output of 156hp.

The Serval has all-time four-wheel drive system. The vehicle features Mercedes-Benz beam axles sprung by coil springs and damped by hydraulic shock-absorbers. The transfer box and axles are equipped with driver-activated differential locks, which may be employed during the vehicle movement.

The Serval has a maximum speed of 120km/h with a range of 830km. The vehicle is airportable by Sikorsky CH-53 heavy-lift transport helicopter.

This project forms part of our recent analysis and forecasts of the global armoured vehicles and counter IED Vehicles market available from our business information platform ‘Strategic Defence Intelligence’. For more information contact us: EMEA: +44 20 7936 6783; Americas: +1 415 439 4914; Asia Pacific: +61 2 9947 9709 or email.