Expand
KAYA mine protected vehicle can transport two crew and ten troops.
KAYA can be armed with a roof-mounted weapon station.
A rear view of the KAYA 4x4 mine protected vehicle.
KAYA 4x4 MPV demonstrates excellent cross country capabilities.
The KAYA Cargo Carrier variant is suitable for carrying cargo on all terrains in threat environments.
A KAYA Cargo Carrier exhibits its mobility during tests. 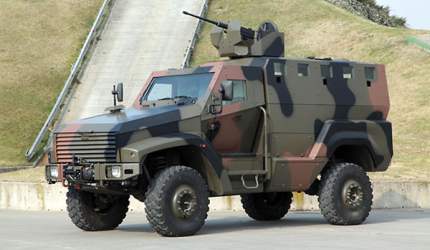 The KAYA is a 4×4 mine protected vehicle (MPV) developed by Otokar, a company based in Turkey. The vehicle is intended to provide mine and ballistic protection for armed forces operating in threat environments.

The development of the KAYA MPV began in 2006 and the first prototype was completed in 2007. The MPV was unveiled for the first time at the IDEX 2009 defence exhibition held in Abu Dhabi.

KAYA MPV is available in two variants, the Armoured Personnel Carrier (APC)/Troop Carrier variant and Cargo Carrier variant. The APC variant features an armoured cabin and a dedicated troop compartment. It can be modified into an ambulance or a command post vehicle.

The Cargo Carrier variant is fitted with armoured cabin and an unprotected flat bed cargo section in place of troop compartment. The cargo compartment is equipped with drop sides and a tailgate.

KAYA is based on the Daimler Chrysler Unimog 5000 chassis. The MPV features an armoured cabin and a crew compartment. The two segments are mounted as separate units to achieve maximum cross country capability. The flexible design also allows the manufacturer to configure the vehicle for various mission requirements.

A large single-piece bullet proof wind shield in the front protects the driver and commander sitting inside the cabin. Either side of the crew cabin is provided with a forward opening door fitted with a bullet proof window.

The slightly raised troop section at the rear accommodates ten troops. The troops are seated on individual seats attached to the sides of the vehicle. The rear door provides entry and exit for the soldiers.

ARMA is a modular wheeled armoured tactical vehicle designed and developed by Otokar in Turkey.

The KAYA MPV can be armed with wide range of weapon stations such as open cupola and remotely controlled weapon station. The overhead station can be mounted with a 7.62mm/12.7mm machine gun or 40mm automatic grenade launcher.

KAYA is specifically developed to provide mine and ballistic protection for the occupants on all terrain conditions, while offering a high level of crew comfort. The engine compartment is provided with armour protection to withstand small arms fire and shell splinters. The V-shaped bottom of the troop section reduces the blast impact by deflecting the bomb fragments away from the vehicle.

The front and rear compartments are fitted with all-welded steel armour. The protection is further enhanced with an appliqué layer of armour. The armour protection around the wheel arches offers additional protection against mines.

The vehicle can be optionally fitted with an automatic fire extinguisher system.

"The propulsion system provides a maximum speed of 96km/h."

The KAYA MPV is powered by an OM 924 LA 4-cylinder diesel engine coupled to a UG-100 tiptronic, electro pneumatic transmission. The engine provides a power output of 218hp at 2,200rpm. The propulsion system provides a maximum speed of 96km/h.

The 200l tank capacity provides KAYA a range of 800km. The wheels are equipped with pneumatic hydraulic dual circuit disk brakes. The vehicle can negotiate a gradient of 60% and side slope of 30%. It can cross vertical obstacles of 480mm and ford 1,200mm deep waters.