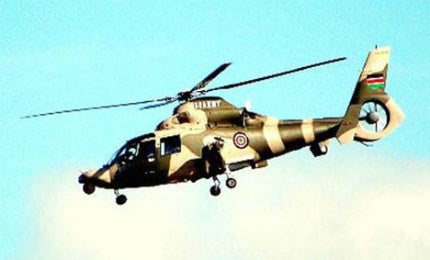 Harbin Z-9W, or Zhi-9W, is an attack helicopter produced by the Harbin Aircraft Industry Group. The Z-9W is an indigenous attack variant of the Z-9 utility helicopter, which itself is a license-built version of the Eurocopter AS365 Dauphin.

The Z-9W can perform in a wide range of missions, including anti-tank, close air support, armed patrol, anti-terrorism and law enforcement.

The Z-9W performed its first flight in 1987. The first missile was test fired from the helicopter in 1989. The production variant was inducted into service by the People’s Liberation Army (PLA) in the early 1990s. The PLA is believed to have fielded 30 to 40 helicopters since. China delivered a number of Z-9W helicopters to undisclosed customers in 2010.

"The Z-9W performed its first flight in 1987. The first missile was test fired from the helicopter in 1989."

The Z-9WA is an improved night attack variant of the Z-9W. Unveiled in 2005, the variant is fitted with a nose mounted EO turret housing a low-light TV and forward looking infrared (FLIR) cameras. Other notable features include redesigned weapon pylons, a new cockpit, an electronic warfare suite and more powerful engines.

The Z-9WE is a light attack helicopter intended for export markets. Four helicopters were delivered to the Kenyan Armed Forces between 2010 and 2011.

The Z-9EC is an anti-submarine warfare variant developed for the Pakistan Naval Air Arm. The helicopter is equipped with ASW torpedoes and a mix of sensors and radars to find, track and destroy enemy submarines.

Cockpit and avionics of the attack helicopter

"The weapon pylons on either side of the fuselage can carry up to eight HJ-8 wire-guided anti-tank missiles."

The helicopter can be optionally fitted with a KDF-806 automatic direction finder, KTR-908 VHF command radio set and a TB-31 intercom system.

The base variant of the Z-9W is equipped with an optical sight installed on the roof of the cockpit over the position of weapon operator. It is used to search and aim the targets, as well as to guide the anti-tank missile in a semi-automatic command line of sight mode.

The weapon pylons on either side of the fuselage can carry up to eight HJ-8 wire-guided anti-tank missiles. The Z-9W can also be armed with two 23mm cannons/12.7mm machine guns/57mm rocket launchers, or four TY-90 air-to-air missiles.

The electronic countermeasures suite of Z-9WA integrates a missile approach warning system and chaff/flare decoy dispensers. The system is capable of detecting infrared signature of incoming missiles. It warns the pilot and automatically activates the chaff/flare dispensers to deceive the missile.

Engines and performance of the Chinese helicopter

The Z-9W is powered by two WZ-8A turboshaft engines. The WZ-8A is a license-built version of Turbomeca Arriel-IC1 engine. Each engine develops a power output of 632kW.

The Z-9W helicopter can fly at a maximum cruise speed of 238km/h, while carrying external weapons. The ferry range with internal auxiliary tank is 1,000km. The helicopter has an endurance of 3.35 hours.

The WZ-551 is a family of wheeled armoured vehicles designed and built by the China North Industries Group Corporation (Norinco) for the People’s Liberation Army Ground Force (PLAGF).