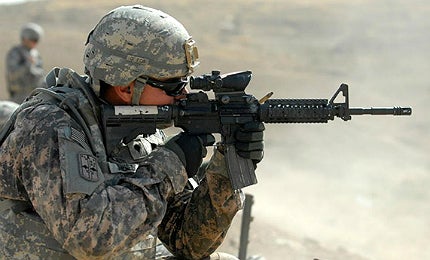 The M4 carbine is a compact variant of the M16A2 assault rifle. Manufactured by Colt Defense, the M4 is a preferred weapon for the US Armed Forces and 21st century war-fighters.

The weapon delivers superior performance and accuracy for the joint coalition forces conducting the most challenging combat missions. The performance of M4 has been proven across the world in military operations, including combat actions in Afghanistan and Iraq.

The US Army has acquired a total of 500,000 M4 carbines since the M4 series was introduced in 1993. The M4 was also exported to the US allied forces and Nato nations as part of foreign military sales (FMS) packages.

In July 2009, the US Army acquired the design rights of M4 carbine from Colt for allowing other manufacturers to contend with their M4 designs.

In April 2012, Remington Arms Company was awarded a contract by the US Army Contracting Command for 120,000 M4/M4A1 carbines.

The M4 carbine variants used by the US Military are R0920 (M4) safe-semi-burst and R0921 (M4A1) safe-semi-auto. These variants are equipped with a detachable rail-mounted handle.

“The performance of M4 has been proven across the world in military operations, including combat actions in Afghanistan and Iraq.”

The M4 carbine incorporates a direct gas operating system. The magazine-fed, shoulder-fired carbine is of straight-line construction. The forearm, buttstock and pistol grip are made of high-strength materials. The M4 offers a high level of fire-power and lightweight mobility.

The shortened barrel allows the forces to operate in close quarters battle (CQB). The barrel configuration accepts all standard rifle grenades and all US as well as Nato rifle grenades. The weapon has a MIL-STD 1913 Picatinny rail and can also be fitted with optical sight night vision systems, laser sight, sound suppressors and bi-pods. The M4 has more than 85% commonality with the M16A2 rifle.

The M4 has an overall length of 84cm and a barrel length of 35.5cm. The weight of the carbine with 30-round magazine is 3.1kg. The weapon can be comfortably carried by soldiers, due to its compact dimensions. It is the only 5.56mm carbine in the world to meet or exceed the US Armed Forces MILSPEC standards.

The M4 product improvement programme (PIP) is intended to modernise the M4 service rifles in the US Army inventory. Phase one covers the conversion and replacement of regular M4s with the M4A1 version. The M4A1 is the fully automatic version of standard M4 carbine.

The second phase of the PIP involves the acquisition of a new bolt carrier for the M4 carbine. The Project Manager Soldier Weapons (PM SW) concluded the competition for the bolt and bolt carrier assembly in April 2012. The PM SW received 11 designs from the manufacturers. The existing bolt carrier design surpassed the competing designs during the testing. Phase two also calls for a forward rail assembly competition.

The US Army is expected to place contracts with up to three finalists in 2013. The final winner is expected to be short-listed in early 2014. The deliveries of new rails are to be made by the summer of 2014 depending on the decision of the US Army.

The M4 Carbine is equipped with target style rear mounted sight with dual apertures. The sight can be adjusted for wind exposure and elevation.

The M4 is a selective fire weapon offering semi-automatic and three-round burst fire modes. The M4A1 can fire rounds in fully automatic mode.

The carbine fitted with M203/M320 grenade launcher is capable of firing high-explosive dual purpose rounds, high-explosive rounds, Nato high-explosive, smoke and illumination grenades. The M4 can fire at the rate of 700 to 950 rounds per minute for an effective range of 600m.

AK-74M is the main service rifle in use in the Russian Army. It is an improved variant of the AK-74 assault rifle.