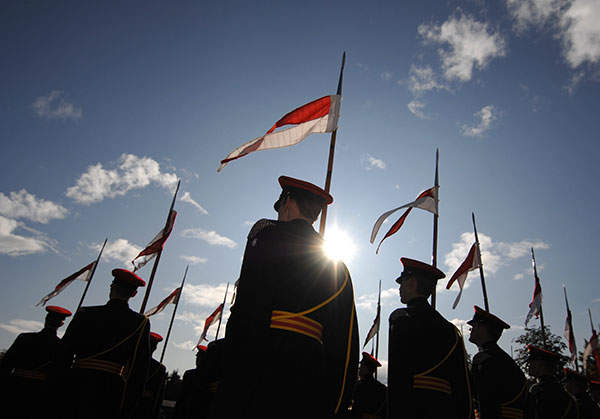 The 4th Mechanized Brigade, also known as The Black Rats, on a parade at Catterick Garrison, Crown Copyright. 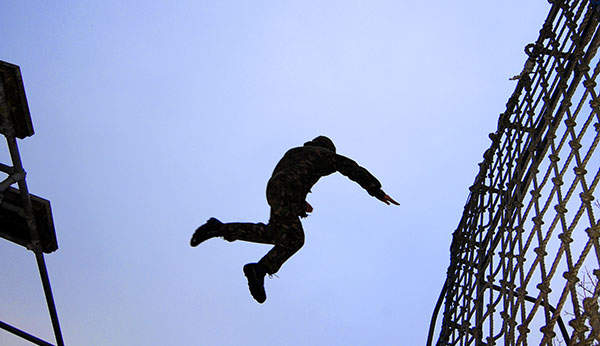 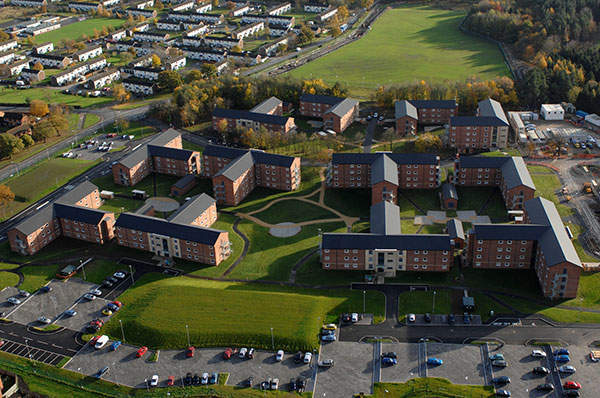 Aerial view of the modernised Single Living accommodation (SLA) buildings which are part of Project SLAM being undertaken by Corus, Crown Copyright. 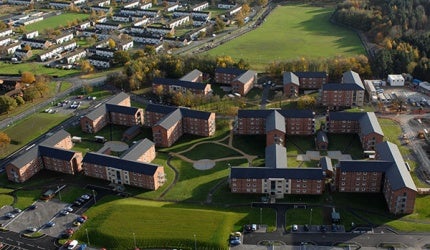 Catterick Garrison is the largest garrison of the British Army, comprising several barracks. The garrison is located near the Yorkshire Dales and the North Yorkshire Moors in Northern England. It primarily serves as a base for the 4th Mechanized Brigade and supports the Infantry Training Center (ITC).

Catterick Garrison has a population of about 13,000, which is more than that of the neighbouring Catterick Village. It currently has 19 barrack compounds, including several other facilities. The garrison features 20,000 acres of military training area.

The garrison also encompasses the Marne-Barracks and the outposts of Ripon, Dishforth and Topcliff.

The present location of Catterick Garrison was first brought up by Robert Baden-Powell, the founder of the Scouting movement, in 1908. The garrison was originally known as Richmond Camp. Initially, the camp was a temporary training centre. The garrison was set up in October 1915 and was renamed as Catterick Camp the same year.

The camp served as a Prisoner of War (POW) Camp for 5,000 prisoners of war at the end of World War I. It was later used as a demobilisation centre, a training centre, a command depot, and a place to dump war materials after ending the war.

The idea to create Catterick Camp into a permanent military training centre was first brought up in 1921 after the partition of Ireland. Efforts to realise the idea began in 1923 when lands were purchased and building plans were put forward. By the mid 1930s most of the facilities at the camp were completed. Major facilities such as the garrison headquarters were also constructed by that time.

Another POW camp was set up during the World War II and the training facilities were expanded.

The garrison caters to the military needs of various units which are under the Ministry of Defence. It serves as a base for the 4th Mechanized Brigade, also known as The Black Rats, which forms part of the 3rd (UK) Mechanized Division.

The garrison provides facilities for all the units under the 4th Mechanized Brigade including the Signal Squadron. It is the largest of the three ITCs in the UK. Both the combined Phase 1 and Phase 2 of the Infantry’s training course, including Phase 2 training for junior soldiers, are undertaken at the garrison. The regiments included in the Infantry are the Footguards, The Parachute Regiment and The Brigade of Gurkhas.

Marne Barracks (formerly RAF Catterick), which is located on the outskirts of the Catterick Village, also comes under the jurisdiction of Catterick Garrison. The former Royal Air Force airfield is now home to the 5th Regiment Royal Artillery and the 1st Battalion Mercian Regiment.

The 19 Light Brigade and its units which form part of the 3rd Mechanised Division are also based at Catterick Garrison.

Other units at the garrison are the Royal Military Police and 150 Provost Company.

Other facilities and services

Catterick Garrison provides about 2,000 quarters for married couples. Unmarried soldiers, who form the majority of occupants, are provided with single living accommodation modernisation (SLAM) facilities. The population at the garrison is expected to grow up to 25,000 by 2020. As part of the SLAM project, Corus is currently undertaking a modernisation initiative which will be completed by 2012.

Other facilities at the garrison include eight schools for civilians, three libraries, five banks, three post offices, medical centres, community centres, churches, supermarkets, Telematic Learning Centre for Darlington College of Technology, a golf club, and various other recreational facilities. A leisure centre was opened at the garrison in 2009.