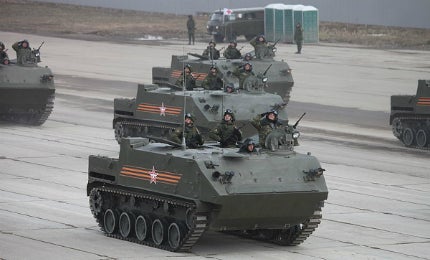 Development of the BTR-MDM vehicle began in 2008. It was unveiled at the Russian Arms Expo, RAE 2013, held in Nizhny Tagil, Russia, in September 2013. The first batch production APCs took part in the Moscow Victory Day Parade in May 2015.

The BTR-MDM armoured vehicle is designed for use by the airborne units / air assault formations of the Navy Marine Corps for the transportation of troops, fuel, ammunition, spare parts, and lubricants. It can be configured as command post machine, communications and control machinery, medical vehicle, and logistics vehicle.

The BTR-MDM APC is based on the BTR-MD Rakushka vehicle developed and manufactured by JSC VgTZ Volgograd machine-building company, a part of the machine building industrial group Concern Tractor Plants. The modernised vehicle features improved performance characteristics and higher reliability compared to the base variant.

Prototypes of the BTR-MDM APC underwent tests conducted by the Ministry of Defense of Russia until the end of 2014. Marine tests on the prototypes were completed in August 2014.

Kurgan machine plant, which is also a part of Concern Tractor Plants, shipped the first batch production vehicles to the Russian Airborne Troops in Tula Airborne Division, under the state programme of rearmament, in March 2015.

The BTR-MDM APC features an all-welded aluminium hull. The vehicle offers increased combat-readiness and high firepower in the battlefield.

Combat weight of the APC is 13.2t and it has a maximum cargo weight of 2t. It is operated by a crew of two (commander and driver) and accommodates up to 13 personnel. The front section is equipped with driver and commander seats as well as three roof hatches.

The vehicle is air-droppable by military transport aircraft such as IL-76 and AN-124 using parachute, and is air transportable by a MI-26 heavy transport helicopter.

Armament and protection of the BTR-MDM APC

Fitted to the BTR-MDM combat vehicle is a roof-mounted, autonomous fire control turret in the left side of the cabin. The turret is armed with a 7.62mm or 12.7mm machine gun. A PKMT 7.62 x 54mm machine gun is mounted on the ball joint for protection from small explosives.

The APC is equipped with two smoke grenade dischargers on each side at the front, for protection from enemy vehicles. The hull offers protection against small arms fire and shell splinters.

"The BTR-MDM armoured vehicle is designed for use by the airborne units / air assault formations of the Navy Marine Corps."

A digital information and control system integrated in the vehicle provides command and control, and communication for the crew. The commander is provided with TNP3VE01-01 combined periscope.

The BTR-MDM armoured vehicle runs on liquid-cooled, multi-fuel, four-stroke, naturally-aspirated UTD-29 engine, which has a maximum power of 500hp. Coupled to the engine is coupled is a four-speed, hydro-mechanic transmission system with a power take-off drive pump.

The vehicle is propelled by two single-stage, axial, screw-type water jets with guide vanes fitted on either side of the vehicle.

The BTR-MDM armoured personnel carrier can reach highway speeds up to 70km/h, water speeds of approximately 10km/h, and average speed between 45km/h and 50km/h on dry dirt roads. Maximum range for the on highways is 500km and 350km on dry soil. The vehicle can endure for up to seven hours when afloat.

The vehicle can climb up to 0.8m-high walls and negotiate a variety of obstacles including trench, wade, and slides. Its minimum and maximum ground clearances are 100mm and 530mm respectively, and working ground clearance is between 400mm and 440mm.