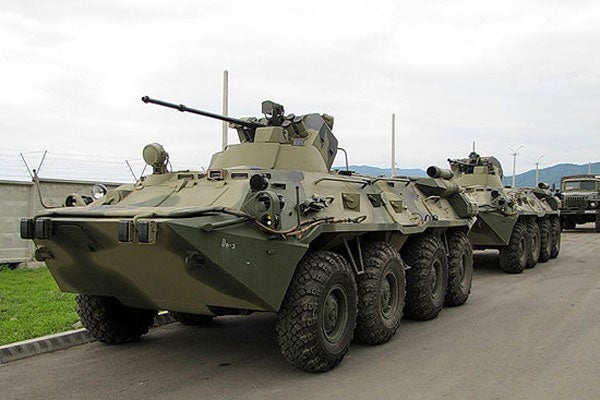 BTR-82AM is an 8×8 amphibious armoured personnel carrier (APC) designed and developed by Military Industrial Company of Russia. The APC is expected to replace the Russian Army’s existing BTR-80 series of APCs.

The amphibious assault vehicle was successfully tested afloat at the marine infantry facility of the Russian Black Sea Fleet in Sevastopol in April 2013.

The Motor-Rifles Brigade based in Samara received the first batch of more than 150 new armoured vehicles in December 2013. It will also receive 120 new armoured personnel carriers.

The Boraq (or Boragh) armoured personnel carrier (APC) is produced by Vehicle and Equipment Industries Group (VEIG), a subsidiary of the Iranian Defence Industries Organisation (DIO).

Design and features of BTR-82AM APC

The BTR-82AM naval infantry armoured vehicle is the latest modernisation of the BTR-82A 8×8 wheeled armoured personnel carrier, which is in service with the armies of Russia and Kazakhstan. The modernised vehicle is capable of performing operations under difficult weather conditions and can manage firing when afloat. The vehicle’s design offers high resistance against corrosion.

The vehicle features an ergonomic seat for the driver and is equipped with a control panel and an instrument panel. The vehicle weighs 16t and is fitted with modern sights.

The BTR-82AM amphibious infantry vehicle features a new integrated fighting module mounted with a quick-firing, dual-feed 2A72 30mm cannon with greatly improved fire power. The cannon has a muzzle velocity of 960m/s and can fire at a rate of 330 rounds per minute.

The APC offers improved armour protection and is fitted with bulletproof wheels. It also features Kevlar inner coating that provides ballistic protection with a hard textured or smooth finish.

The BTR-82AM amphibious armoured vehicle is equipped with advanced electronic equipment including navigation and communication systems for effective engagement of targets.

“The APC offers improved armour protection and is fitted with bulletproof wheels.”

The BTR-82AM amphibious infantry vehicle is powered by KAMAZ turbo diesel engine, which generates a rated power output of 300hp. The propulsion system also consists of enhanced transmission parts, autonomous diesel generator set and suspension to offer high mobility in rough terrain. In addition, it is equipped with a water-jet motor on the rear part.

The armoured vehicle has a capacity to carry 300L of diesel fuel and can attain a maximum speed of 10kmph on water.