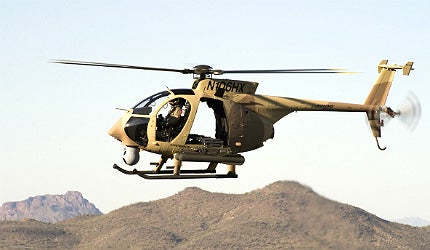 Boeing AH-6i is a light attack / reconnaissance helicopter designed primarily for export markets. It is an advanced variant of the AH-6M helicopter operated by the US Army Special Operations Forces. The helicopter is intended to provide close air support for land-based forces. It can also serve as an attack platform for destroying enemy tanks, armoured vehicles and fortifications.

The AH-6 rotorcraft programme was announced by Boeing at the Association of the United States Army (AUSA) Annual Meeting and Exposition held in October 2008. Boeing began the construction of the first AH-6i prototype at its Mesa facility in early 2009. The prototype helicopter successfully completed its maiden flight in September 2009.

Boeing conducted a flight demonstration of the AH-6i for the US Army’s Armed Aerial Scout (AAS) programme in September 2012.

AH-6i incorporates the combat-proven airframe design of the AH-6M helicopter. The airframe structure was strengthened to cope with the increased weight and weapons fit. The fuselage includes a ballistic tolerant main tank and a new forward canopy structure for the avionics bay.

"The helicopter is intended to provide close air support for land-based forces."

The ground clearance is increased with an extended height landing gear. The modular design allows the integration of flexible mission configurations, as well as additional capabilities for future requirements.

The helicopter features new main and tail rotor systems for superior performance. The flight characteristics were further improved with the addition of enhanced directional control, a new vertical stabiliser and collective trim actuator.

Cockpit and avionics of the helicopter

The MX-15Di can be integrated with up to six high-performance sensors, including a laser designator with LRF, laser illuminator, eye-safe laser range-finder, colour daylight camera with zoom lens, mono daylight camera with spotter lens and an infra red (IR) with high magnification four-step zoom.

The helicopter is equipped with Wulfsberg RT5000/C5000 digital communications system.

AH-6i is powered by a Rolls-Royce 250-C30R/3M engine which develops a power output of 650shp. The engine is controlled by Full Authority Digital Electronic Controller (FADEC). It enables a maximum speed of 132kt.

In July 2010, Boeing and MD Helicopters signed a Memorandum of Agreement (MOA) to jointly produce and market the AH-6i helicopter.

In May 2010, Jordan’s Government signed a letter of intent for procuring the AH-6i light attack / reconnaissance helicopter.

In February 2012, Boeing and the Saudi Arabian Government signed a letter of acceptance for 36 AH-6i helicopters.

Sikorsky X2 is a demonstrator aircraft developed by Sikorsky Aircraft, a subsidiary of United Technologies.

The UH-72A Lakota is a light utility helicopter specifically designed to meet the requirements of US Army.