The AW169 AAS features a hardened airframe, crash resistant seats and fuel systems.
AW169 AAS is a contender for the US Army Aerial Armed Scout (AAS) programme.
The AW169 AAS can be armed with guns, air-to-ground missiles and rocket launchers. 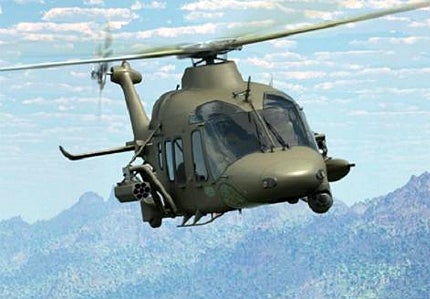 AW169 AAS (Armed Aerial Scout) is a twin-engined armed helicopter developed by AgustaWestland. It is a military variant of the AW169 commercial helicopter.

It can carry machine guns, missiles and rocket launchers to accomplish a range of combat missions.

The AW169 AAS was launched by AgustaWestland during the Army Aviation Association of America Annual Convention in April 2013.

AgustaWestland developed the AW169 AAS as a contender for the US Army’s Armed Aerial Scout (AAS) programme.

The AAS programme is intended to replace the army’s ageing OH-58D Kiowa Warrior helicopters with a new helicopter, incorporating modern technology to meet the current and future requirements of the army.

“It can carry machine guns, missiles and rocket launchers to accomplish a range of combat missions.”

AW169 AAS is designed to meet the Armed Aerial Scout programme requirements. The design and technology used for the AW169 AAS is leveraged from its base model AW169.

The AW169 AAS features a reduced number of components accounting for its low maintenance cost and time. Its airframe has been toughened to resist threats. The cockpit is made of night vision compatible glass and designed for a clear view of the surroundings.

The latest design of the engine and blades lower the heat and noise signatures of the aircraft. Redundant systems are provided for the critical equipments aboard the helicopter.

The cockpit of AW139 AAS can accommodate two pilots with two redundant control systems available for both the pilots.

Sensors, systems and armaments on the helicopter

AW169 AAS is equipped with a FLIR (Forward Looking Infrared) camera to enable the pilot to steer the aircraft during nights and in foggy conditions.

“AgustaWestland developed the AW169 AAS as a contender for the US Army’s Armed Aerial Scout (AAS) programme.”

The sensor suite fitted in the helicopter provides real time awareness for the crew.

The aircraft can be armed with various types of weapon systems to support a wide range of operations. It can carry guns, rocket launchers and air-to- ground missiles.

The aircraft also employs a self-curing fuel system which repairs itself in case of crashes. The AW169 AAS is fitted with a retractable, heavy duty landing gear to enable landings on any terrain.

The AW169 AAS can fly at a cruise speed greater than 259km/h. It has a maximum range of about 550km and an endurance of three hours.