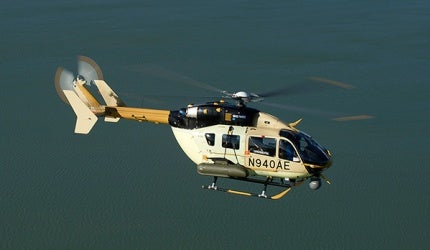 The AAS-72X demonstrator was manufactured by a consortium comprising EADS North America, Lockheed Martin and American Eurocopter. The serial-production helicopters were supposed to be built at the same Columbus, Mississippi facility where the UH-72A Lakota is currently assembled. The AAS-72X never entered the production phase as the AAS programme was subsequently cancelled by the US Army.

The AAS-72X multi-role helicopter was designed to offer unparalleled performance and survivability to meet the requirements of the US Army’s armed aerial scout helicopter mission. The helicopter was intended for armed reconnaissance, medical evacuation, law enforcement and other utility missions.

“The AAS-72X never entered the production phase as the AAS programme was subsequently cancelled by the US Army.”

The development of Aerial Scout 72X began in 2009 and high/hot hover-out-of-ground-effect, endurance and payload testing were conducted in the same year. A UH-72A Lakota/EC145 derivative used in the test successfully operated at 6,000ft altitude at 95% density.

The US Army released a request for information (RFI) for the AAS programme in 2010. A new RFI for the programme was issued in April 2012.

The EADS North America-led team was responsible for the development of three AAS-72X Technical Demonstrator Aircraft (TDA) for conducting parallel development and risk reduction activities. The TDAs were also used to demonstrate the performance and capabilities. The first TDA successfully completed its maiden flight in December 2010.

The transportability test involving the loading of five aircraft into a C-17 transport aircraft was also conducted. A system integration laboratory (SIL) and hangar facilities at Lockheed Martin’s Orlando facility were set up in April 2010. Rockwell Collins joined the AAS-72X team in October 2011. The company was designed to provide simulation and training equipment.

In April 2012, EADS North America unveiled the AAS-72X+ helicopter, which is an advanced variant based on the three Armed Aerial Scout TDA helicopters.

The UH-72A Lakota is a light utility helicopter specifically designed to meet the requirements of US Army.

The AAS-72X TDA is based on the Eurocopter EC145 airframe which is also used by the UH-72A light utility helicopter.

The large, unobstructed main cabin of the helicopter can be reconfigured according to individual mission requirements. It was designed with enough space to carry an auxiliary fuel tank, troops, munitions and additional supplies. The modern design incorporates the crash-worthy airframe, seats and modular weapons for increased operational safety and survivability.

The high-set main and tail rotors enable the loading and unloading of weapons, troops and cargo through large sliding side and rear clamshell doors while the rotors are turning. The compact dimension of AAS-72X TDA allows the transportation by C-17 aircraft with minimal reconfiguration upon unloading in the working area.

Cockpit of the scout helicopter

The AAS-72X TDA features two multi-purpose pylons for carrying a full range of precision and unguided munitions required for the Army for the Armed Scout mission. The TDA 1 aircraft is armed with the M260 seven-shot rocket launcher and an HMP 400 heavy machine gun pod with a 50-calibre M3P machine gun. The M260 can fire 2.75in-folding fin aerial rockets.

The AAS-72X TDA can fly at a maximum altitude of 6,000ft and 95% environments, usually known as ‘6K/95 high/hot’ conditions. The maximum range of the helicopter is more than 424km.