One, with clutched pusher propeller 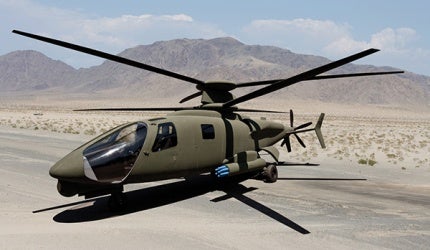 The S-97 Raider is a light tactical helicopter being developed by Sikorsky to demonstrate the capabilities of the company’s X2 Technology. The technology claims to offer safer high-speed flights with improved efficiency and safety.

The S-97 Raider will be offered to the US Armed Forces for flight testing and evaluation for future combat missions. The helicopter is suitable for assault and armed reconnaissance missions. The technology is, however, scalable to a range of other missions such as close-air support, combat search and rescue and special operations. It can fly at speeds of more than 220kt at 10,000ft altitude.

Designed with a lower turning radius and acoustic noise signature, the S-97 is expected to be a game-changer in the light military helicopters segment. The first of two S-97 prototypes was unveiled in October 2014, with its maiden flight scheduled for the end of 2014.

“The S-97 is expected to be a game-changer in the light military helicopters segment.”

Sikorsky initiated the development of S-97 Raider in 2010 as an advancement of the applications of X2 Technology in next-generation rotor-wing technologies. The company will initially produce two S-97 Raider prototypes and send them to the US Armed Forces for testing and evaluation.

The first prototype of the S-97 Raider entered final assembly in September 2013 and was powered for first time in June 2014. The company has selected 35 suppliers for the prototype development, with the majority of them being based in the US. It will invest 75% of the project cost, while the suppliers will invest the remaining total.

Sikorsky X2 is a demonstrator aircraft developed by Sikorsky Aircraft, a subsidiary of United Technologies.

A number of the companies that Sikorsky has teamed-up for the development of the S-97 Raider include Rotating Composite Technologies (RCT), HEXCEL and Eagle Aviation Technologies for the blades; Fischer + Entwicklungen, Aurora, PPG Industries and others for the structure; and Fatigue Technology (FTI), Parker Aerospace, and others for rotors and transmission.

PPG Aerospace was selected in June 2012 to supply the plastic transparencies for the S-97 Raider prototypes. As part of the supply agreement, PPG will develop and produce coated windshields for the pilot and co-pilot, side windows of the cockpit, as well as the lower observation and fuselage windows.

Design features of the S-97 Raider

The S-97 Raider armed scout helicopter is 37ft long and 16ft wide. It is fitted with a 34ft diameter rotor and a 7ft diameter propeller in the rear.

The fuselage of the helicopter will be built of composite materials. The cabin will have seating for a troop of six. The cockpit can accommodate two pilots in a side-by-side seating arrangement.

The helicopter will be fitted with twin rigid co-axial counter-rotating main rotors. An auxiliary internal fuel tank will be provided aft of the cockpit for extended mission support and operational flexibility. The helicopter features a retractable landing gear and fly-by-wire flight controls.

“The cockpit can accommodate two pilots in a side-by-side seating arrangement.”

The S-97 Raider will carry armament payloads including Hellfire missiles, 2.75in rockets, a .50 cal gun and a 7.62mm gun. It can also carry additional ammunition for extended missions. The armament space is located aft of the cockpit – towards the tail of the aircraft.

The helicopter can be armed with external weapons and will be equipped with a variety of sensors to support reconnaissance and light attack missions.

The S-97 Raider will be powered by a single engine. The pusher type clutched propeller will enable the helicopter to fly at speeds up to 220kt. The dash speed will be more than 240kt, which is almost double that of a conventional helicopter. An auxiliary power unit will also be provided to start the engine.