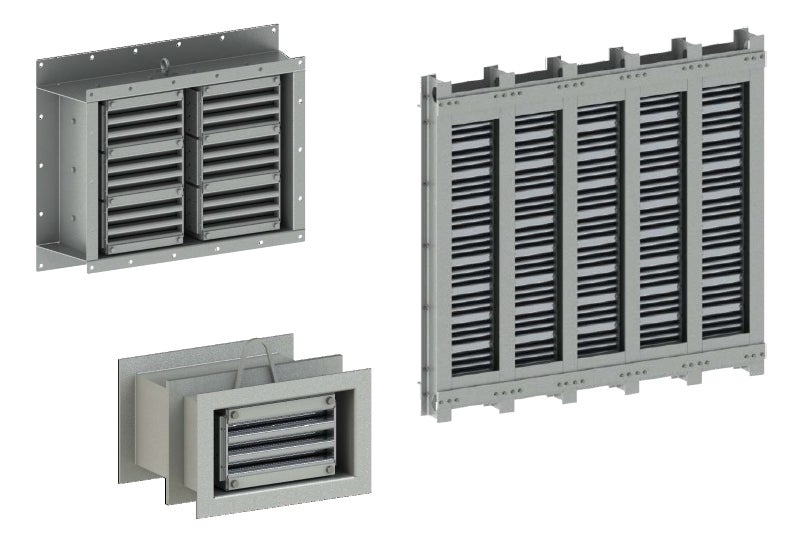 Blast valves are protective elements for air intakes and outlets. Temet blast valves are providing protection from two bar up to 100 bar, based on the model. Blast valves for hardened shelters will be installed into the wall prior to concrete casting to integrate the frame with wall reinforcement.

Blast valves are designed to prevent the penetration of blast waves caused by an explosion through the air channels into the shelter. They are installed in every open-air channel and duct penetrating the pressure protection line of the shelter.

The PVD series blast valves are used as exhaust air valves in civil defence and military shelters. The valves are specially designed to be used in the exhaust systems of diesel engines and are suitable for other applications with hot and corrosive gases. They are also applied for protection of vent pipes of sanitary systems and fuel and water tanks.

Overpressure blast valve is used as air outlet valve in civil defence and military shelters and blast protected industrial facilities. The valve regulates the internal overpressure of the shelter and closes rapidly when subjected to a blast from the outside.

The YV-1 overpressure blast valve comprises a pivoted closing element (pressure disk) closing the air passage against the valve seats in response to the positive phase of the blast or lack of overpressure inside the shelter. The valve is mounted on a structural steel wall sleeve to be cast in the concrete wall.

In case of positive or negative blast load from the outside, the closing elements are instantly pushed against the valve seats thus closing the valve. The valve blocks are mounted in structural steel wall frames that can house one to ten blocks.

Temet had the great honour of hosting His Excellency, Ambassador Raveesh Kumar from the Embassy...

With over 60 years of experience, TEMET is the name in blast and gas protection...