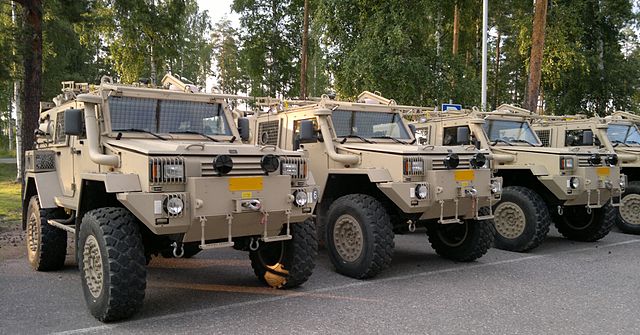 W&E Platt has received a contract from the Finnish Ministry of Defence (MoD) for delivery of additional MR550 Bi-Metal Ring Mount protected weapon stations for installation on the Army’s fleet of RG-32M armoured patrol vehicles.

The $1.7m contract covers supply of a total of 39 Bi-Metal Ring Mounts, and follows a previous order for the delivery of ten systems in late 2011, to help protect vehicle gunners against improvised explosive device (IED) attacks and kinetic threats from small arms fire and shell splinters.

A modified version of the Platt MR550 Protected Ring Mount series, the MR550 Bi-Metal Ring Mount is designed for integration in wheeled and tracked armoured vehicles having a gross weight of under 10t, or heavier platforms that are sensitive to variations in centre-of-gravity.

Weighing under 400kg, the ring mount offers STANAG Level 3 protection, and can be operated manually by using a gearbox. It traverses through 360 degrees, with maximum elevation and depression of +65 and -35 degrees respectively.

Deliveries under the contract are scheduled to start in late 2012.

Image: The ring mounts are also installed aboard the Swedish Army’s RG-32M Scout 4×4 mine hardened patrol vehicles that are currently operating in Afghanistan. Photo: kallerna.