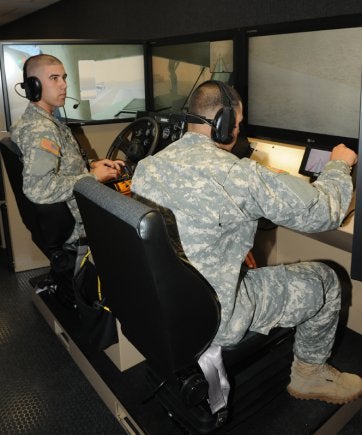 The US Army has deployed the third virtual clearance training suite (VCTS) at Fort Leonard Wood in Missouri to provide real-time route area clearance missions training to soldiers before their deployment.

The system features simulators for the Buffalo mine-protected clearance vehicle, Husky vehicular-mounted mine detector with mine detonation trailer, RG-31 or RG-33 medium mine-protected vehicle and the man-transportable robotic system.

R2C2 course non-commissioned officer-in-charge staff sergeant Otis Petty said the trainer was capable of simulating the characteristics of real-time vehicles to be operated by troops for future route clearance operations.

"This system gives soldiers the time and ability to train on what they need to be proficient in clearance or convoy missions."

"This system gives soldiers the time and ability to train on what they need to be proficient in clearance or convoy missions," Downing said.

"If a soldier is having trouble working the arm of the Buffalo, this system will assist them in getting proficient. The same thing goes for the Husky, RG-31, Panther, Talon IIIB and even the 50 cal [machine gun] training."

Operational in a crawl, walk, run mode, the system enables military instructors to provide training in both individual and collective scenarios, as well as helping the soldiers improve their standard operating procedures (SOPs).

The army has already fielded two VCTSs at Fort Bliss in Texas and Fort Carson, Colorado. It is also planning to deploy a total of 28 systems across its military installations.