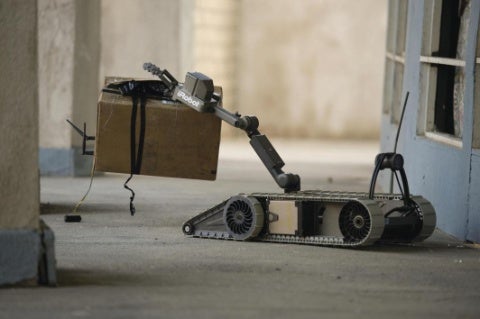 Awarded by the US Army Robotic Systems Joint Program Office (RSJPO), the contract has a maximum potential value of $10m, and covers delivery of the SUGV’s maintenance training and spare parts.

Spare parts will be provided under an initial $2m instalment of the original IDIQ contract.

As part of a separate $3.7m contract from RSJPO, the company will also supply heads-down controllers, featuring a 5.6in sunlight readable LCD display screen to the army.

"We are delivering the heads-down controller in response to specific requests from the field," Wilson said.

“This easy-to-use controller provides the operator with a high degree of situational awareness while conducting dangerous missions."

"This easy-to-use controller provides the operator with a high degree of situational awareness while conducting dangerous missions."

The modular robot features a highly dexterous manipulator that can extend 24in for investigation and neutralisation of suspicious objects and a wearable controller, and is also capable of rotating 360° to enable precision targeting.

With a lift capacity of 7lb, the robot safeguards infantry troops, combat engineers, mobile EOD technicians and other personnel against explosive threats by performing missions in areas deemed inaccessible or dangerous for human beings.

Spare parts will be handed over in early 2013, while deliveries under the second contract are scheduled to complete during the fourth quarter of 2012.