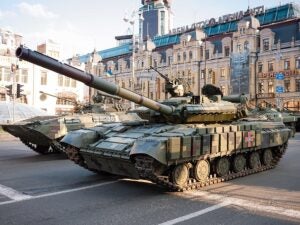 The contract represents a significant step towards the introduction of the tank, great numbers of which are available in Ukraine, on the global arms market.

“The fulfilment of this contract allows providing the Ukrainian enterprises with good work load, increasing profit of the concern and assignments to the budget, as well creating of new working places in as mid-term prospect,” Fedosov added.

Ukroboronprom director general Sergiy Gromov said, “The list of foreign partners, which operate the equipment manufactured in the Soviet Union, show the interest in purchasing of these tanks. We are sure in the success of this product.”

Under the terms of the contract, Kharkiv Plant of Armored Tanks will upgrade a total of 50 tanks.

The contract is also expected to increase the plant’s output by almost up to UAH100m ($11.3m), eventually bringing new possibilities in 2014.

Several Ukroboronprom enterprises are currently upgrading T-64 into the BM Bulat version, in the interest of the Ukrainian Ministry of Defense.

Manufactured by Kharkov Morozov Machine-Building Design Bureau, the T-64 is an upgraded version of the Soviet Era T-62 tank, and features enhanced firepower, protection and passability.

The T-64 tanks are primarily operated by the Ukrainian armed forces.

Image: Ukroboronservice will upgrade T64BV-1 tanks to the advanced T-64BM Bulat version. Photo courtesy of ‘self’.