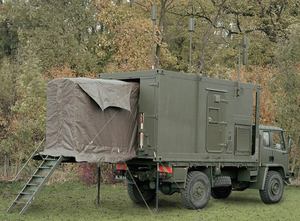 Under the terms of the £18.5m contract, Smiths Detection will procure, store and also manage components that are essential for biological testing process in the advanced technology system.

"Our strong relationship with the MoD has been crucial in building and maintaining the skill base and managing the in-service support programme," Lee said.

The company had already provided IDBS support services for two years under a £7.8m contract awarded by the MoD in December 2010.

Readily transportable by either fixed-wing aircraft or helicopters, the IDBS has been designed to provide commanders with early warning of chemical, biological, radiological, and nuclear (CBRN) threats in the battlefield.

"Our strong relationship with the MoD has been crucial in building and maintaining the skill base and managing the in-service support programme."

The rugged system is housed inside a 14ft container that is either mounted on a four wheel-drive vehicle or ground-dumped, and features a detection suite with atmospheric sampling equipment, a meteorological station, chemical agent detection and cameras for 360° surveillance.

Additional equipment includes main computer systems, independent power supply, GPS, as well as NBC filtration and environmental control for use under in all climate conditions.

Originally manufactured by Lockheed Martin-led consortium as part of a £50m contract in March 2009, the system can be operated by a four member crew and has been used by the Joint CBRN Regiment at RAF Honington since 2003.

Work under the contract is scheduled to be carried out for the next two years.