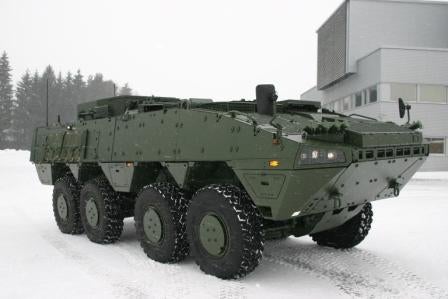 Patria has delivered its first armoured modular vehicle (AMV) under a contract to the Swedish Defence Forces to provide high levels of mobility and protection.

The delivery is part of a €250m contract awarded by the Swedish Defence Materiel Administration (FMV) in August 2010 for production and delivery of 113 AMVs in five different variants to mechanised battalions of the national army.

Commenting on the vehicle, Patria land systems and services president Seppo Seppälä said: "These new armoured wheeled vehicles represent a continuation for the Patria AMV product family, which has received excellent feedback for its performance in international operations."

Powered by a Scania DI 12 diesel engine, the Patria AMV is an 8×8 wheeled, multi-role military vehicle manufactured in close association with the Finish Defense Forces to enhance troop safety against mine explosions in the battlefield.

The vehicles' different components, including engines, steel armour, ballistic protection, suspension and other electronics systems are provided by Swedish companies and currently being assembled at the company's facility in Finland

Remaining deliveries under the contract are scheduled to be complete by 2014.

Patria will also provide lifecycle support for the vehicles as part of a partnership agreement signed with FMV for technical maintenance and modernisation of the army's existing 200 XA-vehicles in 2011.