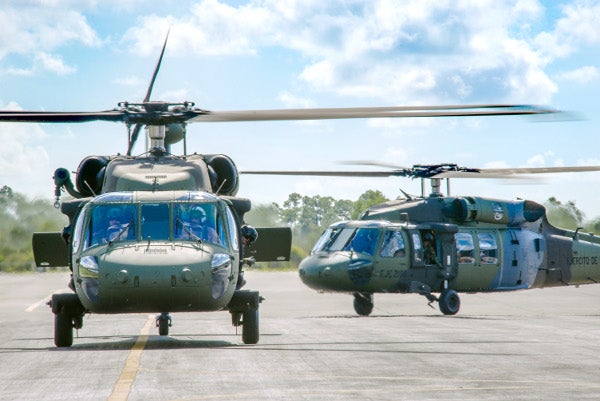 The aircraft are scheduled to join five other S-70i multi-mission helicopters purchased by the COLAR to enhance combat capabilities in January 2013.

Sikorsky army and air force programmes vice-president, Jennifer Caruso, said the HTAWS is designed to provide military operators 360° situational awareness in low visibility, day or night, and at altitudes as low as 75ft.

"As a new baseline capability for all S-70i Black Hawk aircraft, this high-resolution system will enable aircrews to perform their demanding missions with greater safety and effectiveness," Caruso said.

"This high-resolution system will enable aircrews to perform their demanding missions with greater safety and effectiveness."

Manufactured jointly with Sandel Avionics, the system can be adjusted to one of four sensitivity modes, including normal, low, tactical, and obstacles only to help reduce false alerts during low level flights, and also provide audible warnings through the aircraft’s internal communications system to alert the pilots to obstacles.

Besides HTAWS, the helicopter is also fitted with a rescue hoist, an integrated vehicle health management system capable of monitoring the engines, transmission and rotors, as well as additional radios and unique mission equipment.

Image: the Colombian Army’s new S-70i helicopter is fitted with a terrain awareness and warning system to alert the pilots to obstacles. Photo: copyright of Sikorsky Aircraft Corporation.

The Military Aircraft Market in Venezuela to 2025: Market Brief