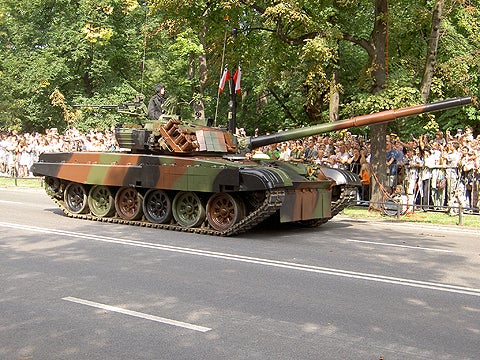 The Polish ministry of defence will spend PLN138.6m ($42m) for the upgrade of T-72M1 and PT-91 Twardy Main Battle Tanks (MBTs) under two separate contracts, the Army's First Regional Logistics Base said in a statement.

The ministry has awarded a PLN32.2m contract to Wojskowe Zaklady Motoryzacyjne (WZM) repair plant for the modernisation of 20 T-72M1 tanks.

According to Defense News, ten tanks will be upgraded by November 2012, followed by a further ten units in late 2013 as per the contract.

The ministry will also refloat its 106.4m zloty tender for the upgrade of 40 PT-91 tanks following the cancellation of the bid submitted by Bumar Group. Around 20 PT-91s will be upgraded by November 2012, and the remaining 20 by 2013.

"By the deadline for submission of bids, three bids were submitted for the first contract, and one bid for the second contract," the statement added.

The T-72M1 is a lightweight, combat-tracked vehicle equipped with a V-12 diesel engine and features a laser warning system (LWS), reactive armour and an automatic loader that can fire ammunition at the rate of 10-12 rounds/min.

The tank has a 125mm smooth barrel main gun, a 7.62mm machine gun co-axial with main gun as well as a 12.7mm anti-aircraft machine gun fitted on the commander's cupola.

The PT-91 Twardy is an upgraded version of the T-72M1 battle tank with a dual-axis stabilised fire-control system, explosive reactive armour, and advanced automatic loader; the armaments remains the same.

The battle tank is powered by a single S-12U supercharged diesel engine for a maximum road speed of 60km/h and is equipped with an advanced LWS, which protects the tank from missiles by automatically firing smoke grenades.